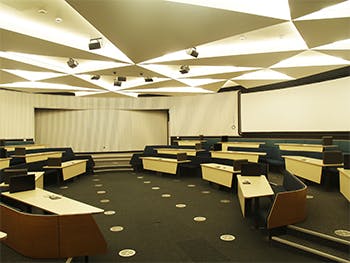 Designed by Birmingham-based Associated Architects and constructed by Willmott Dixon, the building will assist in catering for the needs of the institution’s growing student numbers. The canalside development encompasses two sections of six and storeys respectively, with elevated external amenity space.

The structure extends the University’s award-winning £63 million Curzon building, which has been housed on Cardigan Street in Birmingham’s Eastside since 2015 and continues the University’s transformation of this part of the city.

“From individual study pods to meeting rooms, we hope that students will really benefit from these facilities that will help them achieve success in their studies. We are committed to providing the best possible learning experience for all our students and this extension will play a key part for that aim.

With work now commencing on HS2, we are delighted to be further contributing to the renaissance of Birmingham’s Eastside area with the latest expansion of our City Centre Campus – already a major landmark for hundreds of thousands of people arriving at Birmingham New Street by train every day.
Professor Philip Plowden

As well as a new dedicated IT suite for students – with nearly 100 laptops available for loan – Curzon B boasts an innovative lecture theatre called The Hive that features raked, group activity seating, integrated technology and excellent sight lines.

The new space is also now home to the University’s Centre of Academic Success, the New Technology Institute (NTI) and its Students’ Union.

As part of the project, 3,000 students from the University’s Faculty of Computing, Engineering and the Built Environment gained real-life experience of working across the construction industry by putting the theory learned in the classroom into practice. Furthermore, the developers offered 10 paid placements throughout the build, while three graduates are now employed full time by Willmott Dixon in the Birmingham region.

The building forms part of the University’s £260 million investment into new and advanced facilities which was also strengthened with the opening of the new £57 million Royal Birmingham Conservatoire in September last year.

Later this year, Birmingham City University will open its new £41 million Health Sciences and Education building on its City South Campus on Westbourne Road in Edgbaston.

This building will help reinforce Birmingham City University's status as the region’s largest provider of qualified health and social care professionals to the NHS and producer of more teachers than any other institution in the West Midlands.

The space will offer teacher training and specialist facilities for health sciences including provision for research, a new lecture theatre, a multi-purpose hall, speech therapy, physiotherapy and ultrasound suites, art and technology classrooms and IT hubs.

However, the University has already sold part of the site to the Homes and Communities Agency (HCA) to help meet the city’s growing housing demands and discussions are underway to transform another part of the City North Campus into an athletes’ village for the 2020 Commonwealth Games. Both will leave a powerful legacy for the Perry Barr community as the University migrates towards its City South and City Centre campuses.