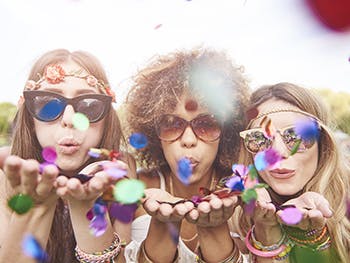 Are you coming to Birmingham this July?

We’re here to let you know everything you can be getting up to over the next four weeks.

We've got all the information about the height of summer in the second city, so you're fully prepared for the delights (or should that be horrors?) of the six weeks holiday!

There are festivals galore in Birmingham this month. Kicking things off on July 4 with the BE Festival. The event pulls from the worlds of theatre, dance, circus, comedy, music and performance art, bringing the best of to the city centre, in and around the REP theatre by Symphony Hall.

Whilst you're in the vicinity of Symphony Hall, you could also check out the Music For Youth Festival taking place there over the same period. If you do, you'll get to hear the best young classical music talents in the UK showcasing their skills.

Birmingham is getting really funky in July. Seriously, you won't be able to move for saxophones and cool hats this summer, as the city plays host to not one but two jazz festivals. The first, the Mostly Jazz, Funk and Soul Festival in Moseley Park, takes place between July 7 and 9, and is headlined by Chaka Khan, St Paul & The Broken Bones, and Soul II Soul. The week after (July 14 to 23), the Birmingham and Solihull Jazz and Blues Festival will be taking over a host of venues across the city, with (mostly free) gigs and workshops.

Films more your thing? We've got a one-two combo for you too! The annual Brindleyplace Film Festival, where a giant screen is set up in the middle of the trendy nightlife spot, returns from July 17 to 23. Films this year include The Avengers, The Dark Knight, Harry Potter, Casino Royale and Cool Runnings [Authors note: This is probably the greatest line-up of films every put together, and you owe it to yourself to go].

On the complete other end of the spectrum, we have the Shock and Gore festival taking place from July 27. Held at the iconic Electric Cinema, the festival shines a light on the best new and classic horror movies. Highlighting this years bill is a preview screening and Director Q&A of new horror flick The Ghoul, plus fan favourites like Shaun of the Dead, Dawn of the Dead, Buffy the Vampire Slayer, Taxi Driver and Godzilla.

Rounding out this glut of festivals is MADE 2017 on July 29. Held in the Digbeth Triangle, this all day music festival includes a Cahse and Status DJ set, plus live performance by Giggs, Gorgon City, Charlie Sloth, Chris Lorenzo, and a Sub Focus DJ set. 90% of tickets have already gone, so act now!

Here is a handy guide to a tonne of music, comedy and exhibition shows that you could check out in July.

Going to any of these events? Let us know!