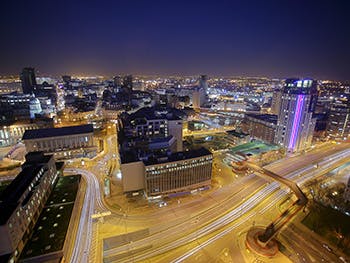 Los Angeles and Birmingham are quite different, it’s fair to say. But that isn’t to say the eyes of tinsel town haven’t been drawn to us on more than one occasion.

So today we’re looking at some of the TV shows and movies that have been shot in Birmingham, showing that just because you’ve come to a University in the middle of England, doesn’t mean you couldn’t bump into Martin Scorsese in Snobs!

Details were scarce in terms of who or what was on set at the time, but now we know that the nearby residents were subjected to tire squeals and explosions for over a week for the sake of the films opening car chase scene. So as Eggys is tearing around in a black cab, chased by men with roof mounted turrets, keep your eyes peeled for, amongst other things, All Bar One on Cornwall Street!

It seems that Hollywood movies are like buses – you wait ages for one, and then two turn up! Hot on the heels of Kingsman, Steven Spielberg arrived to shoot his new film, Ready Player One. Apparently, the world’s greatest film director was sat in his LA mansion, thinking where to shoot his dystopian sci-fi thriller about VR Headsets taking over everyday life, and thought “This calls for a trip to Digbeth!”.

But, seriously, if you happened to capture an image of Mr. Spielberg downing pints of Guinness in The Rainbow, PLEASE send them in!

As inevitable as the sunrise, an article about TV shows in Birmingham mentions Peaky Blinders. Yes, the cities crown jewel does film some of its scenes in Birmingham and the Black Country. But the truth we must all face is that for a large part, the show is actually shot in Liverpool. At least the accents are legitimate though!

The Girl With All The Gifts

There are plenty of independent films that find a home in the West Midlands too, and we’d be doing the spirit of the Flatpack Film Festival a disservice if we didn’t mention them. Critically acclaimed zombie flick The Girl With All The Gifts was shot here in 2015. Starring Gemma Arterton, Paddy Considine and Glenn Close, the film centres on two soldiers who shepherd a young girl through a zombie apocalypse.

Taking the unusual approach to film 100% of the movie within a car, Locke stars Tom Hardy as he makes a manic trip between Birmingham and London to see the birth of his child. The film was shot, in real time, on the M6 motorway.

Can a film shot inside a car stuck on the M6 really be classed as a “film shot in Birmingham”? Well, as any morning commuter on the Aston Expressway will attest, it may be the most accurate portrayal of Birmingham life ever put on film!

Sex Lives of the Potato Men

One to forget. The much maligned British comedy starring Mackenzie Crook and Johnny Vegas details . . . exactly what you think it does. Since its 2004 release, it has often been described as one of the worst movies ever made.

Well they can’t all be classics.

Know of any other movies set in Birmingham? Let us know!