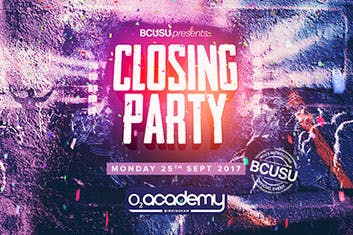 As Freshers week winds to a close, you're no doubt turning your attention to the weekend. For a lot of you, this might be your first weekend in the city, or maybe the first time you're planning on going out with your new classmates.

As luck would have it, the first weekend of term has landed on a very busy weekend in Birmingham. So if you're looking to get out and about, you're spoilt for choice! Here are our picks for what to get up to this weekend.

The biggest event in town this weekend is the Birmingham Weekender. The city's biggest arts festival, you'll see dance, music, art and live performance shows pop up all over the place. It's a great excuse to get familiar with venues all across the city, with Eastside Park, the Bullring, Grand Central, Birmingham Hippodrome, Victoria Square and Arena Birmingham all playing host to events.

A staple of weekend life in Birmingham these days, the Digbeth Dining Club is a street food showcase that takes place every Friday and Saturday on Digbeth High Street. On Friday, Pietanic, Buddha Belly, and Flying Cows (just voted the best burger in the UK) are just some of the vendors that you will find there.

The O2 Academy on Hollyway Head has not one but two gigs on tonight. In one room you'll find Machine Gun Kelly, the up and coming award-nominated rapper. In another, you can catch legendary Wu-Tang Clan member Ghostface Killah on his headline tour.

Want to stay a little closer to home? Then join in the Freshers Friday at Envy event at our very own SU pub, the Eagle and Ball! There's a live DJ, drink deals, and giveaways.

It's a little out of the way from the city centre (10 minutes by train), but the National Exhibition Centre is one of Birmingham's crown jewels. It hosts exhibitions throughout the year, covering everything from gaming and comic conventions to fashion (and, you know, Crufts!). This weekend, there are three exhibitions you could check out - A Place in the Sun Live, The Cycle Show, and the EGX video game convention.

The Midlands is blessed with football clubs. Aston Villa, Birmingham City, West Bromwich Albion, Wolverhampton Wanderers, and Walsall are all within driving distance. This weekend, Aston Villa are in action against Nottingham Forrest at Villa Park. Birmingham and Albion are also in action over the coming week.

Back again! On Saturday night, the one and only Ne-Yo is in town, just in case all the action of the Birmingham Weekender wasn't enough!

Because you can never have too many city encompassing events on any given weekend, the Birmingham Velo will see 15,000 cyclists pedal around the countryside before racing to the finish at Arena Birmingham. If you have already signed up, good luck! And try not to plow over any street performers whilst you're at it!

Hopefully by now a lot of Birmingham's positives are starting to shine through, but one you will only realise when you walk around the city centre is how great our shopping scene is. Unlike some cities (we're looking at you, London), everything is centralised, with the Bullring, New Street and Grand Central containing everything from big name brands to unique boutiques. Go explore - who knows what you may find!

Wind things down on your Sunday night by taking in La La Land - Live in Concert at Symphony Hall. It will be a nice, relaxing way to cap off your first weekend as a BCU student. . .

Until the Freshers Closing Party on Monday!

Going out this weekend? Let us know!