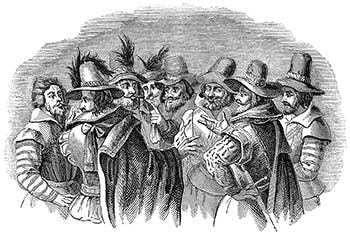 As Bonfire Night approaches, Birmingham City University’s Dr Lily Hamourtziadou, Lecturer in Criminology, and Jonathan Jackson, Teaching Fellow in Criminology, reflect on the Gunpowder Plot to see how it aligns with contemporary academic discourses around terrorism and motive.

The 5th November is often seen as an opportunity for families to get together on a cold night and enjoy a firework show. What many do not often contemplate is the parallels that can be drawn between those who participate in terrorism in the 21st century and the actions of Robert Catesby and his followers in 1605. As the wooden models of Guy Fawkes go up in flames, it is important to recognise that the narrative which surrounds the motivations of these would-be martyrs needs to be re-examined.

The infamous Gunpowder Plot is sometimes described as the first instance of terrorism to take place in the United Kingdom. What is terrorism and does the failed Plot fit any of the definitions of terrorism or irregular warfare, as we understand it today?

‘Terrorism’ is perhaps the most contentious term in political science. It is a pejorative word used in conflict situations to contrast one side’s legitimate killing to another side’s illegitimate killing, such as state forces against non-state forces. Therefore, terrorism conflates two ideas: the terrorising of civilians and force used by non-state actors.Political non-state armed groups can be nationalist – movements claiming to represent a nation, using force to achieve independence for their people or to prevent secession – or religious, such as Hezbollah, Al Qaida, the Islamic State or the Muslim Brotherhood.

Terrorism is a type of irregular warfare. It involves small groups with relatively few resources. Terrorists target non-combatants and symbols associated with the state. Other types of irregular warfare are: coup d’etat (instigated by a small number within the system –officers. Those who conduct them seek power to change policies or correct ethnic or religious exclusions – and gain wealth in the process); revolution (the primary goal being to paralyse and overthrow an existing government, in order to redistribute power and resources. It has two critical components: a group of political organisers who work within a population, and a population that is oppressed, exploited and frustrated. Without the masses behind it, a revolution is doomed to fail); insurgency (harnessing resources in order to conduct attacks using guerrilla tactics designed to inflict ever-increasing losses on the government or occupying forces, and spread instability, uncertainty and fear); and civil war (competing factions within a territory for the control, recognition and legitimacy to govern a state).

Irregular warfare is revolt from the margins, it is anti-elite. Whatever their roots (politics, religion, culture) the most common feature is an opposition to existing centres of power (Paul Rogers, ‘Irregular War’, 2016). Irregular warfare is primarily about politics and organisation. Violence plays a role in irregular warfare, as in all forms of war, for political purposes: to demonstrate the ineptitude of the ruling government and to intimidate and coerce populations. The ultimate goal is political power for the purposes of political, social, economic, or religious change. 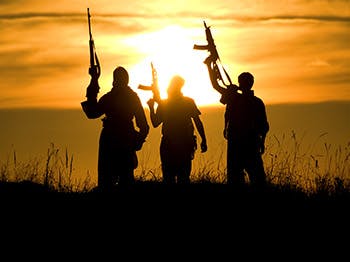 Historically, insurgents and terrorists have taken one of two approaches: to outlast and force the eventual withdrawal of an occupying adversary or to gain internal support from the population, as well as external support from sponsors, so as to increase their political and military capabilities to overwhelm the forces of an adversary. At its core is a cause based on grievances. Grievances can include ethnic or religious persecution, foreign occupation or domination, economic disparity, or other perceived injustices. Insurgencies can be:

Anarchist (to weaken and destroy the existing order)

Apocalyptic-Utopian (religious rewards or punishments must be meted out)

Reformist (existing order can be saved)

Egalitarian (a more equitable society can be created)

Pluralist (to establish a system of individual freedom, liberty, and compromise and in which political structures are differentiated and autonomous)

Preservationist (the status quo must be maintained because of the relative economic, social, and political privileges they derive from it)

Secessionist (to break away from existing order and establish its own)

Commercialist (to profit from chaos)

In order to understand the 5/11 Plot, the political climate of 16th and 17th century Elizabethan England needs to be examined, and the plotters’ actions understood in that context. Were they part of an insurgency? A civil war? Were they reformists, pluralists, or traditionalists? Or were they members of an anarchist insurgent group?

During the reigns of Queen Elizabeth I and her successor, James I, hatred of Catholics developed into an aspect of the national ideology. By the time of the Queen’s death ‘no good Englishman could have defined his national identity without some mention of his distaste for Rome’.

Throughout the Queen’s reign, Catholic forces menaced England. Catholics become a threat, in terms of the possibility of a coup or revolution centred around Mary Queen of Scots, and also a possible invasion from Catholic Spain. Elizabeth’s reign would see the ‘Roman beast’ destroyed and the Kingdom of Heaven established on earth. Uncertainty would be eliminated and good would win the battle against evil. This provided the country with a coherent explanation of its position, a national identity and a mission. Elizabethan anti-Catholicism was a national phenomenon.

The Catholics and the Roman Catholic Church were viewed as a highly-organised, united front, rather than a collection of individuals, each with his own methods and aims. The Gunpowder Plot, then, was seen as part of a vast conspiracy to return the nation to Catholicism. But was it?

As with the actions of Islamic State fighters today, western media outlets often project the image of a religious fanatic, whose only desire is to kill, in order to seek eternal life. In reality, the motivations of these perpetrators often lie in much more human needs and desires; to be respected, admired, loved and feared.

Robert Catesby, who has been largely ignored by the history books, was the leader of the gunpowder cell and is often seen through a distorted narrative. Catesby was clearly a driven and determined man, but could it be that the motivations for planning the bombing of Parliament may stem from a personal, rather than spiritual setting?

Years before the Plot was even in its development stages, Catesby and his family had been heavily fined during the reign of Elizabeth I, losing most of their wealth for remaining loyal to the Catholic faith. He himself was forced to give up his education at Oxford for refusing to agree to take the Oath of Supremacy.

Without a degree and seeking purpose, Catesby married in 1593 and even with the unfortunate death of his first son in infancy, his second son Robert survived, and for a while Catesby does not show signs of the radical plotter he would later become. The death of his father in 1598 and his wife a year later, seems to have had a devastating impact and he begins to demonstrate more radical behaviours after their loss.

It is not uncommon that with the death of a family member or friend, people can re- examine their personal accomplishments and seek to find meaning in their lives. It may be that the perceived label of ‘religious fanaticism’ that has been given to Catesby, was in fact a reaction to the family loss and with a new revised perspective, a compulsive need to regain honour and status which he felt had been denied to him by the state.

With the loss of key family members, Catesby may have sought some form of meaning to his life and his aggressive and violent behaviours post 1599, shows an impetus to seek glory and purpose. Similar behaviour traits are not uncommon with ISIS fighters and the cloak of religious fanaticism begins to slip when exploring their motivations. With members being subsequently arrested and interviewed regarding their involvement in the organisation, many allude to family loss, and chasing purpose lay much more at the heart of their support for the ideology and actions of the group. Dedication and devotion to their faith is secondary to that of their personal need to gain the recognition that they so crave.

In 1601 Catesby took part in the Essex Rebellion, but was captured and fined for his involvement. Once again, the cost of his devotion to his faith forced him to sell the remainder of his estate, leaving him without status and purpose. 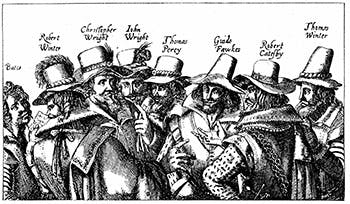 The exact time period in which Catesby began to plan the operation which would become known as the Gunpowder Plot is unknown. What is likely is that the idea was devised in 1604 and in collaboration with his close friend Thomas Percy. A wild child himself, Percy had turned to Catholicism relatively late and through participation in the Plot, he too may have sought the praise of his family after years of unpredictable behaviour. Through both Percy and Catesby, the motivations of the main conspirators, seem less fanatical and more rational, motivated by ego rather than righteousness.

The need to seek meaning and purpose brought two men together who sought redemption and acceptance. The success of the operation to destroy Parliament would have returned them to the status they felt they deserved. In a perverse narrative, terrorism becomes less about ideology and is instead described in terms of the individual motivations of the perpetrators themselves.

It can sometime become easy for societies to see terrorism through the ideologies, rather than human behaviours. Historians now agree that the success of the Gunpowder Plot would have likely seen conditions for Catholics worsen, rather than improve, and Catesby and his supporters may not have been able to rely on popular support.

Did the plotters wish to paralyse and overthrow the government, in order to redistribute power and resources (revolution)? Were they one of two factions competing for control of territory and legitimacy to govern it (civil war)? Was this a revolt from the marginalised Catholic population? Or were they commercialists, trying to profit from chaos? Was Catesby an Elizabethan al-Zawahiri, the leader of Al-Qaeda?

5/11 demonstrates the complexity of such acts of rebellion, where neither personal or individual drive and responsibility, nor organised group ideology and mission can be fully understood in isolation. Whatever the ideology, cause or objective of an insurgency, however much or little the group is organised, it cannot meet with any success without those leaders and those individuals who, through their own drive, reasons and ambitions, will voice that grievance, fight that battle and be prepared to risk their own lives in the process.

Next time you watch those fireworks, think of all those villains and heroes who, whether out of a sense of justice, a personal ambition, a wish to destroy, or simply a desire to control, became part of history.