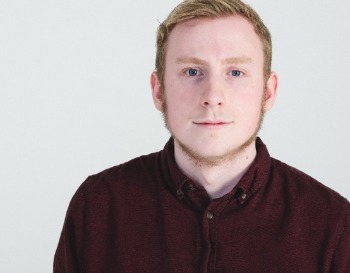 During William's time studying BA (Hons) Film and Animation, he had the opportunity to work in the industry and 'soak up' wisdom and knowledge from his tutors and fellow students.

You can check out William's work on his personal website.

What inspired you to pursue a career in animation?

I'd always been a big fan of Pixar from a young age, the idea of creating a world and bringing it to life really fuelled my passion for animation and motion graphics. Seeing television and film graphics, as well as narrative short film; it was really the life that the graphics had, the movement, that inspired me to create my own.

Who, according to you, defines the word ‘inspirational’?

That's easy, my parents. My cystic fibrosis made them have to put so much more effort and time just for me to live a normal life, and I'll be eternally grateful for what they did for me. My new film Pep Mask (see below) is dedicated to them, and everything I create and do in life I do for them and for my girlfriend.

What’s the biggest challenge you’ve encountered in life, and how did you overcome it?

Well my cystic fibrosis is full of various challenges and difficulties, but as I've known no different, it's not really something that's a big challenge for me. I'd probably say running the London Marathon. Training to take up running and training towards the 42km goal was very difficult, and the hospital visit that led from it was equally challenging. I had a lot of support from friends, family, and tutors though and with their help I raised over £3,000 for the Cystic Fibrosis Trust.

What three tips would you offer to a student about to begin studying on your course?

The main one is to do as much as you can, engage with the course and your tutors and your classmates as much as you can. Go to as many events as possible, share your experiments and small work with your tutors as well as the final pieces. Get to know tutors on other courses as well. Secondly, try and teach your skills. Not necessarily in a big group, but sharing knowledge with classmates is one way to help people engage where they may be struggling. There’s also nothing more confidence-building than passing on your skills, in my experience it has validated the knowledge I have and put it to good use. Thirdly is to be aware that if you’re struggling, then it’s likely that many other people in your class are as well. Not everyone is going to be on top of their game all the time, and even if they look like they have no problems, it’s not always the complete truth. If you’re having problems with deadlines or creative block or whatever, then talk to tutors or classmates about it, because there’s nothing worse than being stuck alone with your problems.

What experiences from the course will help you most in your next job?

There have been a couple of collaborative projects in the course which have got me into the mindset of getting work from some people and delivering work to others, which I’ve already been able to use on client projects. Similarly, I've been able to get jobs based on contacts that the University has and the guests that have spoken at the campus. It’s difficult to single out specific experiences, because I’ve been taught skills that have then led to something else and slowly snowballed into more knowledge. I had the fortune of being hired for a client project by a past graduate five weeks into my course, and that was the first major piece of client work I had completed, and taught me many things. Similarly, being featured by Adobe in 2014 and teaching for them in 2014/15 has improved my confidence a lot.

What are your career plans after graduation?

I am very lucky to have been given a job in the Custard Factory already which is really exciting, I’ll be able to carry on producing animation and motion graphics work on a regular basis. I have also got a few avenues for freelance work as well which I'm looking forward to. There are also places I would love to get some experience with like Territory Studio in London - who create screen graphics for films like The Avengers. Just like at uni, I want to soak up as much of the industry as I can, and have a fun time doing so.

Describe yourself in three words.

What's the funniest thing that happened during your time at university?

My tutor Matt Tromans describing why he repeats things within his teaching style: "I warn people what I'm about to say, I say it, then I remind people what I've just said." I also saw someone close a door and accidentally pull the handle off - that was pretty funny.

Tell us about some of your work

Pep Mask is a four-minute film about a physiotherapy routine I have had to complete since the age of around 7 to alleviate the effects that Cystic Fibrosis has on me. It’s a very personal account of the routine and my relationship with my parents, to whom the film is dedicated.

What is your favourite thing about Birmingham?

I adore the view out of my window at night when the street is illuminated by street lamps and passing cars. There's a certain Blade Runner quality to it. I live on the eighth floor of a building so I get the chance to just look down at busy life happening within the darkness of my room. There's always movement and light and life happening in Birmingham.

Here are some video links of William's work: