I’ve tried to like golf, I really have. Despite evenings spent at the driving range swinging until I am dripping with sweat and it being a hobby with one of the best wardrobes going, I’ve just never been able to grasp its appeal. However, when you throw a cocktail bar and scrummy street food then suddenly, I am interested.

After being a success in Liverpool, Ghetto Golf has recently made its Birmingham debut at the Custard Factory in Digbeth and is creating quite the buzz. It was only fair then that my fiancé, one of our close friends and myself met for a post-work game and gossip in this adults-only venue to see what all the fuss was about. 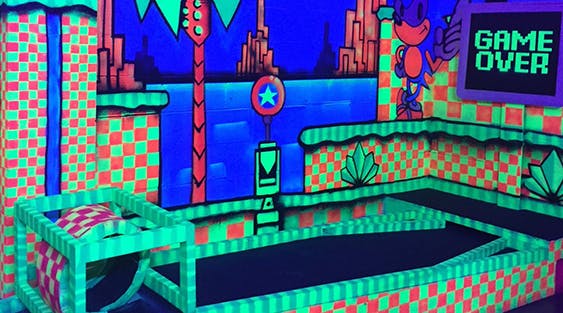 Stepping into a former warehouse space on Gibb Street, you are immediately encapsulated by a sea of colour and fairy lights, peppered with street art murals by local painters. It is a real treat for the eyes, but one that requires a stiff drink and so, before we had even picked up our clubs, we headed for a cocktail. Ordering a Love Heart (complete with Swizzels Matlow fizzy sweet) a Ghetto Punch and a Golfer’s Paradise (all sugary and strong), we caught up in the spacious bar area, waiting for our turn to tee off.

With a drink in hand, we then commenced our 18-hole journey, after a health and safety briefing. It may be ghetto inside, but we’re still in the UK after all. Immediately, I was too busy enjoying the scenery to focus on my gameplay and I was well over par on the first few holes that take place down a back alley, among a petrol station and, incredibly, inside an actual bus. 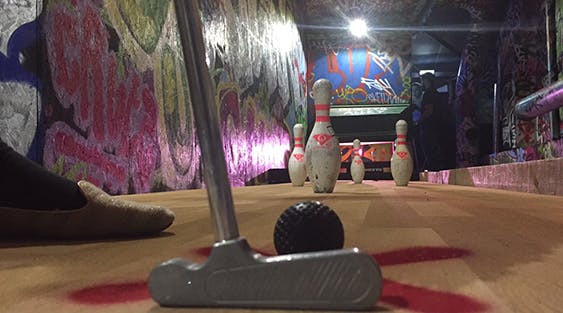 The attention to detail of the holes is impressive, with lots paying tribute to Birmingham in particular, including a mock-up the second city’s oldest inn, The Old Crown, a reference to one of UB40’s biggest hits and a huge mural of a Cross-City Line train.

The final few holes make you feel like you’ve been sucked into a series of retro computer games, with classic characters such as Mario, Donkey Kong and Sonic the Hedgehog popping up among fluorescent landscapes that evoke famous levels from iconic Nintendo and Sega titles.

Oh, and as for the drinks, don’t worry if you run out. There are plenty of bar staff circling the venue, ensuring you’re well topped up while you play. 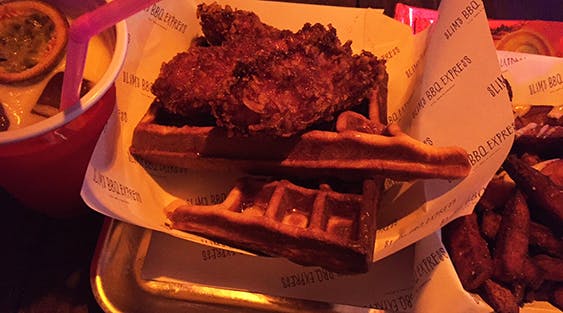 Just when you think the fun is over, the final hole leads back to the bar and Slims BBQ Express, a smokehouse which mixes British and American cuisine via ingredients from the Far East. I went for the fried cornflake chicken waffle (with syrup, obviously) and my partner had the pulled pork sandwich, complete with an Asian salad. Oh, and another cocktail each.

Ghetto Golf is next level entertainment. In a world where we’re told that virtual reality will be the next big thing, it is satisfying to see a simple gaming concept beautifully executed, albeit one that has its tongue firmly in its cheek and its winking seductively back at you. Great for a date or for small groups of friends, Ghetto Golf Birmingham is a cracking night out and at £10 a go, it’s certainly more than worth the money.