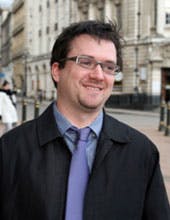 Cheltenham-based Philip studied part-time for his bachelor’s degree in Electronic Engineering at Birmingham City University. He was already a professional working full-time when he came to the University so studying for a degree alongside this was a challenge.

The part-time course had already proved popular as it enables employers to release their employees to study one day and one evening week. This was the case for Philip, who was sponsored by his employer, the Stroud-based division of ABB Ltd. Throughout the course Philip achieved excellent results in all subjects; however, his project work proved exceptional and earned him both the Avery Weigh-Tronix project prize and a first class degree.

His project entailed designing and building a ‘Micromouse’ robot. This is a miniature, wheeled vehicle, intelligent enough to navigate its way through a complex maze of miniature alleyways, against the clock. Philip also created a ‘rolling road’ to help simulate the mini-robot’s behaviour during its development.

Philip found the course content of significant value. He says: “Since completing the degree, I’ve been promoted and found the electronics and programming skills I’ve learned most valuable in my new role.” He now has longer-term ambitions to pursue chartered engineer status and will be considering studying for a master’s degree in due course.