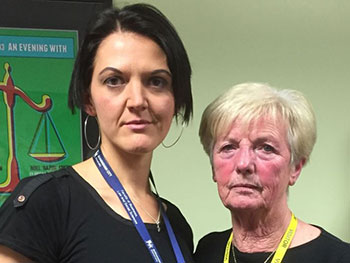 Justice Secretary David Gauke has announced that his team are preparing new legislation that could mean killers who refuse to reveal the location of their victims’ bodies are jailed indefinitely.

Birmingham City University criminologist Professor Elizabeth Yardley has supported the campaign for ‘Helen’s Law’ to be implemented, first launched by Marie McCourt in 2015.

Marie’s daughter, Helen, was murdered by Ian Simms but he has never revealed the location of Helen’s body.

“The protections afforded to those who have chosen to do harm all too often work to the detriment of those affected by their choices. The changes prompted by the campaign for ‘Helen's Law’ will ensure that individuals convicted of homicide offences who refuse to reveal what they did with their victim's bodies will no longer be able to torture their victim's families and be granted parole. The reforms are testament to the tenacity of campaigners like Marie McCourt, who have selflessly channelled their own trauma into demands for change.

“There are many flaws in our current criminal justice system. Many aren't even aware of them. People were horrified when I told them why we needed ‘Helen's Law’, they just assumed that an offender would never be released in such circumstances. The changes that are afoot show that when we do draw attention to gaps and shortfalls, and shout loudly enough, change can happen. This kind of change is the reason I became a criminologist.

“I have worked with offenders who have been convicted of homicide offences and several who have gone on to change. These men now achieve a sense of fulfilment from helping others rather than a sense of control through harming others. Reorienting your value system in this way is not easy. It demands that you acknowledge the harm that you have done and the effect this has had on others. It demands that you engage in a process of change to tackle the underlying traits and behaviours that lay behind your decision to do harm. An important part of this process involves being open and honest about your offence and letting go of the need to exercise control by keeping the secret of what you did with the victim's body. Any offender who does not do so is someone who is not committed to change - and by implication, will continue to pose a risk to others. They may not go on to kill anyone when they are released but they will certainly continue to spend their lives manipulating, coercing and hurting others. These are not the kind of people we want in our communities.

By tightening up the process around granting parole to convicted homicide offenders, we limit opportunities for offenders to do further harm, we better protect the public and we provide a real opportunity for change and rehabilitation.