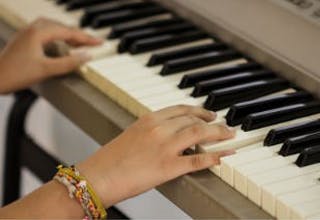 The 'Wider Opportunities' (WO) programme is a national initiative which provides whole class teaching of instrumental and vocal music to primary schools. In 2000, it was announced by the then Secretary of State for Education and Skills that: "Over time, all pupils in primary schools who wish to, will have the opportunity to learn a musical instrument" (Ofsted, 2004 p.4).

After a pilot stage, the programme and policy that arose from this came to be known as the 'Wider Opportunities Pledge'. This pledge was supported by Youth Music alongside the DfES. Financial support for this measure came via the music standards fund from government, and in a DCSF circular it was observed that: "By 2011, all primary school pupils who want to can have the opportunity to learn a musical instrument. Two million pupils will have been given the opportunity to learn an instrument. Nationally, by 2011, over two million pupils will have had the opportunity to learn a musical instrument for free, normally in a large group or whole class setting, for at least one year. (This represents over 80 per cent of the Key Stage 2 population). By 2011, programmes will be in place that will result in every child having this opportunity during their time at primary school" (DCSF).

Birmingham Music Service was at the forefront of this programme, and the research looked into teacher attitudes and ways in which the programme could be delivered effectively. The research involved a city-wide survey involving nearly 200 respondents, with numerous follow-up interviews.

The WO programme has had significant impact in schools. Findings included:

Further research into the WO programme in Birmingham has been developed as a result of this work.