Jazz broadcasting in the 1960s 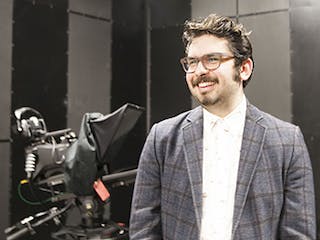 This research project aims to recreate the golden era of music television, examining 1960s jazz broadcasting and transforming the University's main TV studio in order to simulate an authentic creation of a jazz programme. The project, 'Jazz On BBC-TV 1960-1969', will be facilitated by the Jazz Research cluster at the University, which is led by Professors Nicholas Gebhardt and Tony Whyton. The cluster contains 29 members, including 12 jazz researchers and nine doctoral students.

Although focused on BBC jazz programming, Dr Pillai hopes the project will stimulate additional research on ITV's music output, as well as the relationship between jazz radio and television, and on the reception of BBC jazz television in Commonwealth countries.

In order to realise this, researchers will be working from the original BBC camera scripts, while the cutting-edge facilities in the University's £62 million Parkside Building can precisely record the role of improvisation in the relationship between a television crew, their equipment and a contemporary working jazz group.

The research also represents the first attempt to document the location and print quality of existing 1960s BBC jazz television, drawing on the University's own archive and by establishing a cross-generational forum of archivists, fan collectors and media studies academics.

It is more imperative than ever to record the expertise of those who worked within 1960s jazz broadcasting, in order to gain their knowledge and understanding before it's too late. The project will reinstate television as a crucial part of the British jazz narrative, but also put televised jazz within a larger understanding of the broadcasting landscape.

The study presents opportunities not only to generate an interdisciplinary theoretical model of music television production for the 21st century, but also to engage wider communities of musicians, media professionals and arts audiences.