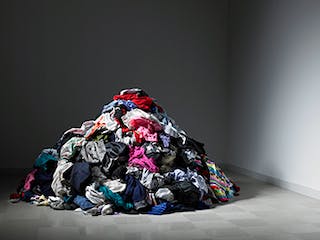 Academics at Birmingham City University are working on a connected wardrobe that addresses the problem of unworn clothes by reminding you to wear them -- or give them away to charity.

The initiative will create an Internet of Clothes that sees garments tagged using washable contactless technology, known as radio-frequency identification (RFID). Every day clothing will tweet and message users asking to be worn depending on the weather and frequency of wear. If these notifications are ignored, the garments will get in touch with a clothing charity and ask to be recycled, with an organisation automatically sending out a mailing envelope for return.

The project has been made possible by Maker Monday, an open innovation project from Birmingham City University that brings artists and technologists together to create new concepts. Mark Brill will be leading a team from Maker Monday to deliver the Internet of Clothes.

The project has been shortlisted among 12 other projects for a Network for Innovations in Culture and Creativity in Europe (N.I.C.E) Award, which is organised by the european centre for creative economy (ecce). €20,000 will be distributed among four winners of the N.I.C.E. Award, which will be announced in Essen, Germany on Thursday 25 August.

The project aims to challenge people’s relationship with fashion and clothing usage – as a society, we own four times as many clothes as we did 20 years ago, but regularly only wear about 20 per cent of them.

Mark Brill explains: “the connected wardrobe is a practical, engaging concept to encourage people to think about their clothing consumption. Ultimately, I hope it will encourage more ethical fashion consumption."

Perhaps we can even move away from the idea of ‘ownership’ of clothing, to simply using them as long as we need them. When we’ve worn them enough, the items will pass themselves on to their next keeper to wear.

The average American buys 64 items of clothing a year and UK shoppers buy 2.15 million tonnes of clothing and shoes annually, yet UK citizens have an estimated £30 billion worth of unused clothing sitting in their closets. A century ago, people on average spent more than half their money on food and clothes, today this is less than a fifth.

Overconsumption of clothing is a problem for both the environment and exploitation of those who produce them. Clothing production is highly damaging to the environment, from the petrochemicals used in synthetics to cotton growing, which uses more pesticides than any other crop. Bleaching, dyeing and finishing adds further pollutants to the environment and use considerable energy resources.

Figures show that clothing manufacturing is among the most exploitative industries in the world, with workers some of the lowest paid and 85 per cent of them are women. The collapse of the Rana Plaza building in Bangladesh, killing over 1,100 people in 2013 highlighted these often appalling work conditions. 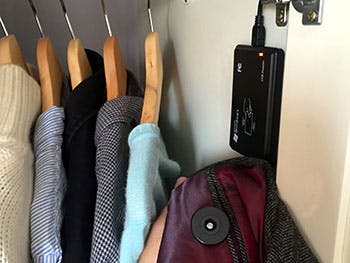 “As well as ensuring unused clothes go to charity, the Internet of Clothes could also automate the options for selling our own clothes, meaning unloved items are automatically posted to eBay, ASOS Marketplace or Depop, for example.

“Think of the surprise when an owner suddenly receives bids for items they didn’t know were in their wardrobe!”

If successful, Birmingham City University academics hope to use the prize money to develop their working prototype into a network of many open source wardrobes – or an Internet of Clothes. Garments will compare and share their usage to others in the network with their own story about where, when and who wore them, as well as being able to offer individual items up to someone else.

Future innovations for the technology could also see the creations of a ‘style matcher’, which will encourage greater usage of clothing by making wardrobe combinations easier to find. Furthermore, the academics involved would like to see garments tagged at the point of retail, meaning clothing labels could also let buyers know details such as the exact origin of the item, who made it and how much the worker was paid for it.