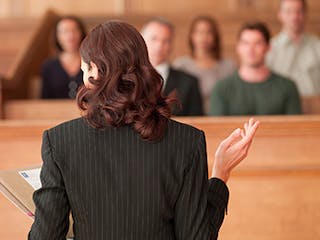 Eyewitness testimony is often vital in court but how reliable are people’s memories of events? Our research investigated the extent to which witnesses may convey incorrect information without realising it, and what could be done to reduce the likelihood of this happening.

For the police and the courts it is crucial that witnesses report their observations at a crime scene as accurately as possible. Yet it has been found that, when people witness an event and later learn additional information about that event that is incorrect, they often include that incorrect information in their description of the event. In psychological literature, this phenomenon is known as the misinformation effect. Such incorrect information can be conveyed through various channels such as the media, other witnesses, or the police. Witnesses who report misinformation can unintentionally obstruct criminal investigations.

The reasons why a witness reports misinformation are manifold and include elements such social pressure (‘That is what they want to hear from me’) and poor source memory (i.e. reporting the first thing that comes to mind without thinking about where it is remembered from). Understanding the exact reasons why misinformation is reported can help developing strategies to avoid or detect such errors during a police interview.

A scientific study was conducted to examine the reasons why people report misinformation (which has implication as to how this could be handled in police interviews), and whether these reasons differ depending on whether the misinformation concerns an important/central aspect of the event or a more peripheral one.

Participants first watched a short video and were then provided with two pieces of misinformation, one about a central aspect (such as the perpetrator’s actions) of the event from the video and one about a peripheral aspect (such as an accomplice’s head wear). When later asked to answer questions about the video, some participants were warned that they may have been exposed to misinformation, which is assumed to discourage reporting the misinformation because of, for example, social pressure. Furthermore, participants were asked where they remembered specific pieces of information from, with the aim to nudge source memory.

It was found that the warning considerably reduced the misinformation effect for the central aspect, whereas asking about the source of a memory was particularly helpful to identify reported misinformation for the peripheral aspect, although the effect could not be completely eliminated.

This research has contributed to improving understanding of how to obtain accurate witness reports. Overall, the findings suggest that (1) the reasons for reporting misinformation vary depending on how important something is to the witnessed event, and (2) that both a warning and asking where a specific piece of information is remembered from can be beneficial to reduce the misinformation effect.