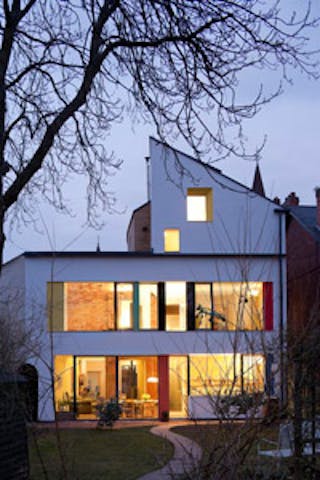 Retrofit Plus is a project led by Professor Lubo Jankovic at Birmingham School of Architecture and Design. Building on the results of research into zero carbon retrofit over the past few years, the research team secured £1.2 million in external funding, collaboratively contributed by Beattie Passive and Technology Strategy Board, as well as industrial partners Carillion Energy Services Ltd, Lime Technology Ltd and iZdesign Ltd.

The scheme aims to transform social housing into energy efficient smart homes, reducing heating energy bills, lifting low-income houses out of fuel poverty and help reach the UK’s aim of reducing greenhouse gas emissions by 80 per cent by the year 2050. By this time, it is estimated that 80 per cent of the houses in the UK will be the houses that exist now, so the principles of zero carbon retrofit are especially important for mitigating the impacts of climate change.

As part of a pilot scheme, two semi-detached houses in Birmingham have been retrofitted, slashing energy consumption by 80 per cent, and reducing levels of noise and damp.

Method and aims of research

The Retrofit Plus project will drive innovation in the energy retrofit of homes, drawing upon academic, technology start-up and private sector expertise. “Ad-hoc approaches to retrofit could be hit-and-miss,” said Jankovic. “Retrofit Plus takes a more structured approach, ensuring certainty through detailed design and testing processes.”

We have received many positive comments from the tenants of our retrofitted properties, who are already enjoying a warmer, healthier living environment, as well as reduced energy bills."

The Retrofit Plus pilot scheme demonstrated the ability of the project, with energy consumption and carbon emissions reduced by 80 per cent. Some of the approaches used included:

The project facilitates experimental investigation of different solutions for 100 per cent carbon emissions reduction and end user engagement and change of behaviour. Combined under a new business model, the project is designed to unlock the market potential and deliver substantial scaling up of retrofit at a cost efficient price.

The work builds on the experimental research on Birmingham Zero Carbon House, a Victorian property that has achieved carbon negative performance through retrofit. Professor Jankovic and his team carried out extensive monitoring and computer simulations to identify and generalise key zero carbon design principles to be rolled out across the UK. Watch the video to find out more.

A range of energy-efficient methods were introduced into two semi-detached houses, located in the Shard End area of Birmingham. Residents were able to continue living in the properties while the team worked on an array of changes, including installing new triple glazed windows and doors, mechanical ventilation and a heat recovery system. The houses were also fitted with TCosy, which wrapped the entire buildings with a new insulated layer, eliminating heat loss and making the buildings draught-free.

Ron Beattie, of Beattie Passive, said: “With further innovations we expect to see the process become quicker and more affordable. We have received many positive comments from the tenants of our retrofitted properties, who are already enjoying a warmer, healthier living environment, as well as reduced energy bills.”

The Retrofit Plus project is targeted at over six million homes with solid walls, and opens up innovation into a multi-billion pound market, as well as saving time through off-site manufacturing and transforming buildings to internationally-recognised Passivhaus performance.

Jankovic, L. (2016) Zero Carbon Buildings Today and in the Future 2016, proceedings of a conference held at Birmingham City University, 8-9 September 2016

Jankovic, L. and H. Huws (2012) 'Simulation experiments with Birmingham Zero Carbon House and optimisation in the context of climate change'. In proceedings of BSO 12 - Building Simulation and Optimization, 11 - 12 September 2012, University of Loughborough.

Jankovic, L. and H. Huws (2012) 'The Effect of Thermal Mass and Thermal Insulation on Retrofit Under Climate Change'. In Proceedings of Urban Sustainability and Resilience, 5 November 2012, University College London.

The Zero Carbon House website (not affiliated with the University).

The Retrofit Plus project will drive innovation in energy retrofit of homes, drawing upon academic, technology start-up and private sector expertise.