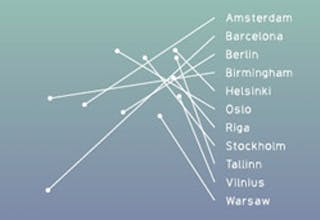 Birmingham City University was selected to be one of the partners in the project, which was valuable in raising the profile of the University and forming new relationships with some of the most influential cities across Europe.

The project aimed to explore how these metropolitan cities can fully unlock the potential of the creative economy. It focused on five themes:

The University's role included working with the other cities in sharing insights into the set-up of creative spaces, collaborative models in the arts and city approaches to digital futures. Delegates from Amsterdam, Oslo, Riga and Vilnius visited several creative spaces and galleries in Eastside, such as the Custard Factory, Fazeley Studios, Vivid, Grand Union and Eastside Projects.

Representatives from Amsterdam underlined that experiences from the Birmingham visit supported them in finding ways to involve creative entrepreneurs and the Art Schools in the re-development of creative spaces and places throughout their city.

There were four major outcomes of the project: