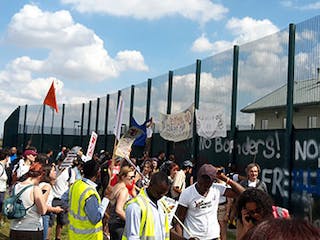 School of Media Senior Lecturer Dr Kirsten Forkert is collaborating with UK and Italy-based academics to deconstruct the media representations of the European refugee crisis. The research project, titled ‘Conflict, Memory, Displacement’, is being funded by the AHRC (Arts & Humanities Research Council) and the ESRC (Economic and Social Research Council) and will run for a period of 18 months. The voices of the refugees themselves will be at the forefront of the project, which will combat the absence of a real refugee perspective in the mainstream media.

“Our research project was inspired by a crucial humanitarian shift which occurred last year. The summer began in the UK with a series of newspaper headlines and speeches calling asylum seekers ‘swarms’, ‘floods’ and ‘marauders’, with controversial ‘Sun’ columnist Katie Hopkins even comparing them to ‘cockroaches’.''

“At the same time, in the UK, donations of clothing to Calais were organised fairly spontaneously on social media – which seemed at odds with the rhetoric coming from the Government and the mainstream press.''

This research study aims to:

The results gathered from this research will be displayed in an exhibition, dramatised as plays in London and Bologna and will be sent to policy-makers, activists and academics. This study will also help to spread awareness and encourage solidarity towards refugees as the public will be able to better understand the issues that they face.