Register via the 'Book Now' button above. Once registered a link to view the performance will be emailed to you prior to the start time. 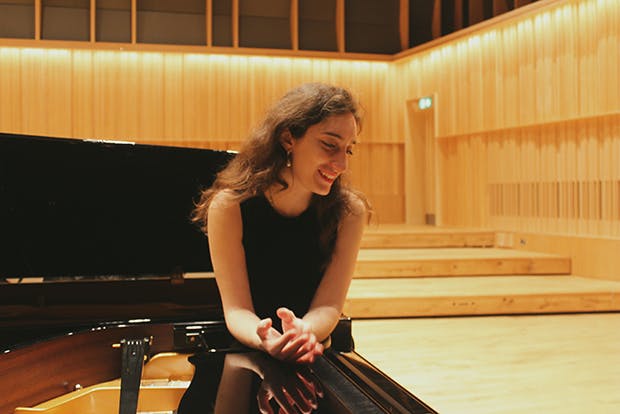 Salomé Chitaia was born in Tbilisi, Georgia and started playing piano at the age of 16. During her years at the Tbilisi State Conservatoire, she held the Presidential Scholarship for four consecutive years and was the last student of the renowned piano professor Nana Khubutia. After graduating with honours, she continued her studies at the Academy of Music in Krakow with Prof. Dr Hab. Andrzej Pikul and Dr. Marian Sobula and at the Fryderyk Chopin University of Music in Warsaw with Prof. Dr Hab. Jerzy Romaniuk. During her studies in Poland, she became a laureate of a number of international piano competitions.

In 2017, Salomé was selected by the Chopin Society in Warsaw to be their representative and has since given around 100 recitals and chamber music concerts at Nowy Swiat Muzyki and the Chopin Salon.

In 2019, after her first recital in Paris in Cormeilles-en-Parisis she was invited to participate in the festival “Georgian Immigrant Musicians in Tbilisi” which brings Georgian musicians from all around the world back to their homeland to play chamber music concerts and give masterclasses in different music schools throughout Georgia. This was followed by an invitation to play at the RBC International Piano Festival 2019.

Salomé is a recent graduate of the Advanced Postgraduate Diploma course at RBC, where she was taught by Pascal Nemirovski, John Thwaites and Mikhail Kazakevich.