Podcast from the Past with Stuart Maconie and Liz Berry 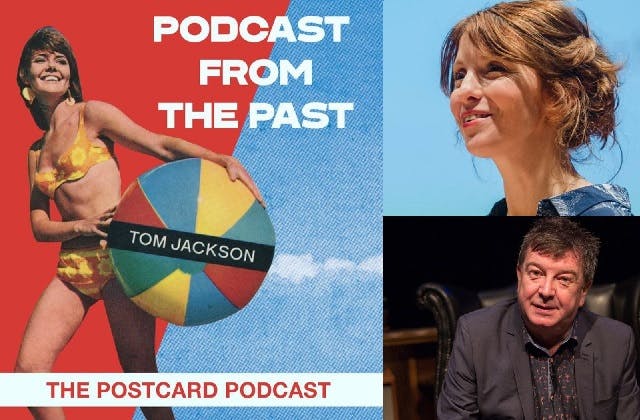 With Liz Berry and Stuart Maconie, in conversation with Tom Jackson.

Don’t miss this live recording of Podcast From The Past with writer and broadcaster Stuart Maconie
and poet Liz Berry - hosted by Tom Jackson.

Tom Jackson quickly gained a cult following with his popular Twitter feed @pastpostcard and book Postcard From The Past, which curates the funniest, weirdest and most moving real messages from the backs of old postcards.

Now he digs deeper, into the personal stories behind old postcards.

“Fascinating, funny, poignant.” BBC Radio 4 Extra on Podcast From The Past

Liz Berry was born in the Black Country and now lives in Birmingham. Her first book of poems, Black Country (Chatto 2014), described as a ‘sooty, soaring hymn to her native West Midlands’ (Guardian) was a Poetry Book Society Recommendation, received a Somerset Maugham Award and won the Geoffrey Faber Memorial Award and Forward Prize for Best First Collection 2014. Her pamphlet The Republic of Motherhood (Chatto, 2018) was a Poetry Book Society Pamphlet choice and the title poem won the Forward Prize for Best Single Poem 2018. Liz works as a tutor for organisations including the Arvon Foundation and Writing West Midlands.

Tom Jackson has collected postcards for many years and in 2016 started posting their messages online. He curates the Twitter feed Postcard From The Past - @pastpostcard, and is the author of the book of the same name. He also hosts Podcast From The Past, where guests tell their postcard stories.

Stuart Maconie is a writer, broadcaster and journalist familiar to millions from his work in print, on radio and on TV. His previous bestsellers have included Cider with Roadies, Pies and Prejudice and Adventures on the High Teas, and he currently hosts the afternoon show on BBC 6Music with Mark Radcliffe as well as weekly show The Freak Zone. Based in the cities of Birmingham and Manchester, he can also often be spotted on top of a mountain in the Lake District with a Thermos flask and individual pork pie.