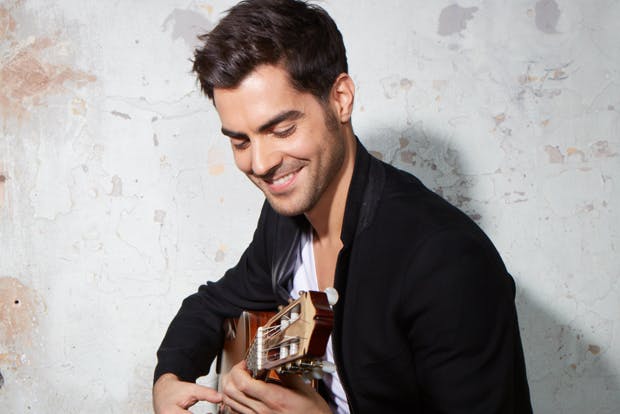 Firmly positioned as a leading exponent of his instrument, “The hottest guitarist in the world” (Sunday Times), Miloš Karadaglić, continues to top record charts and delight audiences worldwide.

His first three releases on Deutsche Grammophon achieved major chart successes around the globe and turned him into “classical music’s guitar hero” (BBC Music Magazine) overnight. His 2014 recording of Rodrigo’s concertos had the Sunday Times calling him “The King of Aranjuez”, while “Blackbird – The Beatles Album” (2016) was received with unanimous acclaim.

Miloš has appeared in recital at almost all major concert halls and festivals around the globe and has worked with many of the world’s leading orchestras and conductors. He is also the first ever classical guitarist to have performed in solo recital at the Royal Albert Hall in London, The Guardian commenting: “More extraordinary by far, however, was the way a single guitarist… could shrink the Hall’s cavernous space into something so close.” The Independent concluded: “… a sleight of hand that makes Karadaglić not only a magician, but a serious and accomplished musician”.

In August 2018, Miloš returned to the Royal Albert Hall with the BBC Symphony Orchestra to give the world premiere of ‘Ink Dark Moon’, an exciting new guitar concerto written for Miloš by Joby Talbot. The performance, part of the 2018 BBC Proms, was received with great enthusiasm

In the 2018/19 season, Miloš will curate a musical journey through the repertoire that has been most important to him so far in his life and career. Titled “The Voice of the Guitar”, this programme will see him perform solo and with various ensembles throughout the United Kingdom, Europe, Asia and the United States. “No other guitarist can match his graceful blend of personal charisma and technical finesse.” (The Independent)

Miloš remains committed to commissioning new repertoire, especially when it comes to the repertoire for guitar and orchestra. 2018/19 will include another concerto world premiere of Howard Shore’s first ever guitar concerto, which was commissioned for Miloš by the National Arts Centre Orchestra Ottawa and Alexander Shelley.

Miloš is a passionate supporter of music education and acts as a Patron of Awards for Young Musicians as well as Ambassador for Live Music Now, the London Music Fund and the Wigmore Hall’s Learning Programme. Taking every opportunity to promote classical music to the widest possible audience, Miloš often finds himself in the role of radio and TV presenter, having appeared as a mentor for the nationwide talent competition Guitar Star on Sky Arts, in addition to co-presenting the 2014 BBC Young Musician competition and returning as a member of the jury in 2018.

Born in Montenegro in 1983, Miloš first started playing the guitar at the age of 8. At 16, he successfully applied for a scholarship to study at the Royal Academy of Music and moved to London where he continues to live while keeping close ties with his family and homeland. He was appointed a Fellow of the Royal Academy of Music in 2015. In 2016 BBC Music magazine included him amongst six of the greatest classical guitarists of the last century.

VIDAʼs ability to “conjure up an orchestral palette of colour and effects” (Classic FM) combined with their “exquisite tonal and dynamic control” has firmly established them as a passionate and masterful ensemble who sparkle with “vitality and spontaneity” (Acoustic). VIDAʼs seemingly effortless sense of ensemble and their broad range of timbres and dynamics evokes “listening to an entire orchestra and not merely to four guitars. Thereʼs only one word for it: magic” (Gramophone).