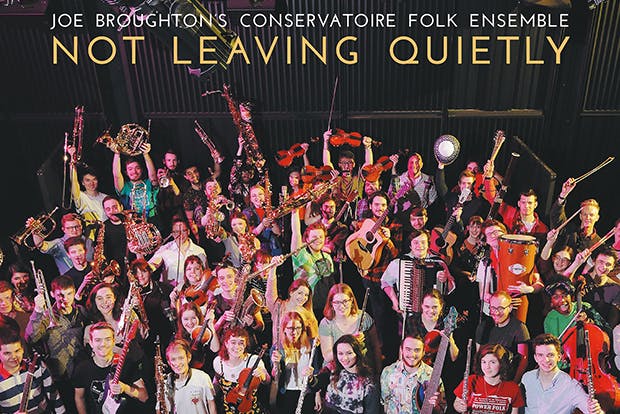 The 50-strong folk band are hosting an online launch party for their new record Not Leaving Quietly.

The ensemble, which has been unable to rehearse or perform together for the last 15 months, release the album that they hope coincides with the end of limits on social contact in the UK.

Made up of dozens of current music students and graduates from Royal Birmingham Conservatoire the outfit recorded their latest album in March 2020 – just weeks before the first lockdown called a halt to all their musical activity.

The Not Leaving Quietly album, named after the ensemble’s October 2019 performance of the same name at the EU Parliament in Brussels, will also be available to stream online from Saturday 19 June.

A staple of the British contemporary folk scene, Joe Broughton’s Conservatoire Folk Ensemble are renowned for their energetic, rousing and musically diverse shows at venues, festivals, and concert halls, as well as capturing the public’s attention in more unlikely spaces such as major railway stations, shopping centres and derelict buildings across the UK.

Combining traditional folk melodies, styles, reels, ballads and song with contemporary influences from heavy metal to classical, drum and bass to Arabic, the Ensemble produce an immersive live music experience that has won them fans across the globe.