Necklace for an Elephant and Other Stories 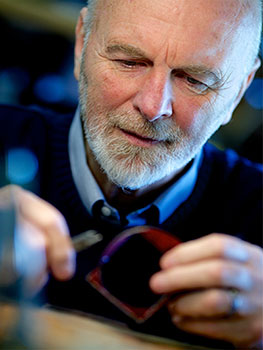 The School of Jewellery is proud to be hosting a contemporary jewellery exhibition, showcasing the multi-faceted work of David Poston.

Described as a ‘restless non-conformist’, Poston’s career has spanned jewellery, international development, photography and working as an inventor. Delicate jewellery made of rose thorns, the hefty weight of a limestone necklace, a piece made of discarded Coca Cola bottle tops; Poston’s jewellery speaks of his restless, experimental spirit.

Exuberant and thought-provoking, Poston’s designs are at the same time minimal and sensual. He always wanted to make jewellery which related to the wearer’s self and which they would wear as much of the day and night as possible. By the time he was in his thirties, David's work had been bought enthusiastically by people in the UK and elsewhere and by major international museum collections.

Besides being a jeweller of international fame, Poston has pursued several other careers, some of them simultaneously. In 1970 he photographed The Rolling Stones in concert at The Roundhouse, and was commissioned to document performances by many contemporary bands such as Fairport Convention and by experimental artists such as Stuart Brisley and Marc Chaimowicz. In 1986 his PhD research into the development of rural manufacturing industries in Central Africa led to a new career in international development. Documented within the exhibition is an example of a mobile tool-making training workshop in Tanzania.

Today, David combines making jewellery and being a consultant to new technology start-ups with gaining his pilot’s licence.

'Necklace for an Elephant and Other Stories' brings together the different aspects of his creative career for the first time, to show the significant wider impact he has made.

Gaynor Andrews, Head of the School of Jewellery says:

We are delighted to be hosting such a prestigious exhibition at the School of Jewellery.  Heightening our students awareness of the diverse achievements of such a high profile Jeweller and designer will hopefully provoke ambitious thoughts of their own for the future.

The ‘Necklace for an Elephant and Other Stories’ exhibition will be open to visitors from Monday 11 January 2016 to Friday 29 January 2016, for you to come and explore the worlds of David Poston.

Alongisde this, the School of Jewellery will be hosting an afternoon symposium and private view on Wednesday 13 January 2016.

In conversation with David Poston: Across Continents: adventures in and beyond contemporary jewellery.

Book your place at the symposium