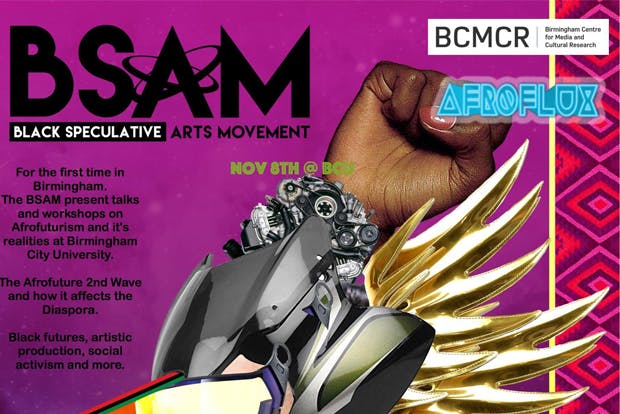 For the first time ever, The Black Speculative Arts Movement, a collective based in the USA who tour their Afrofuturism and Astro Blackness themed workshops around the world are bringing their future realities to Birmingham UK on the 8th of November 2018.

This night will be of great importance for those who have become aware of Afrofuturism and now ask not only what it is but also how it can help go forwards in the here and now.

Who are the BSAM?

The BLACK SPECULATIVE ART MOVEMENT, aka BSAM, is a year long, traveling afrofuturism, comics, film, and art convention held at multiple universities, colleges, and venues around the globe. Our movement, was co-founded by associate professor and chair of the Humanities department at Harris-Stowe State University Reynaldo Anderson. We conduct seminars, classes, hands on workshops, plays, step shows, and much more. Afrofuturism and Astro Blackness has been practiced in our community for years, especially thru literature, visual arts, and music. Artists like Sun Ra, Octavia Butler, Basquiat, Fela Kuti, George Clinton, John Coltrane, Alice Coltrane, Samuel Delaney, Jimi Hendrix, Paschal B. Randolph, Toni Morrison, Amiri Baraka, Tananarive Due, and the ZULU NATION are excellent examples. BSAM is a loose umbrella term represented for different positions or basis of inquiry: Afrofuturism, Astro Blackness, Afro-Surrealism, Ethno Gothic, Black Digital Humanities, Black (Afro-future female or African Centered) Science Fiction, The Black Fantastic, Magical Realism, and The Esoteric. Although these positions may be incompatible in some instances they overlap around the term speculative and design; and interact around the nexus of technology and ethics.

This is brought to you with a collaboration of the BSAM and AfroFlux and sponsored by the Birmingham Centre for Media and Cultural Research and Birmingham School of Media, Birmingham City University.