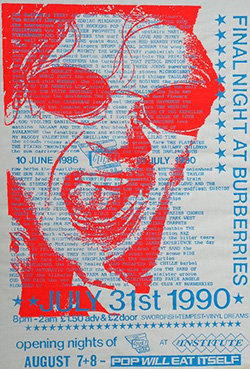 2016 sees the thirtieth year of The Click Club, an opposite moment to explore and celebrate such a space and the scene it represented. This exhibition draws upon the personal archive of Dave Travis whose posters, magazines, ephemera and photographic record detail a dynamic space and time.

Established in 1986 by promoter and photographer Dave Travis, ‘The Click Club’ was the name of a venue and disco associated with Birmingham’s alternative music culture.

Located at nightclub ‘Burburries on the Street’, on a pre-regeneration era Broad Street, capacity was limited to a few hundred attendees on any one night. However, there is case to be made about for importance of ‘The Click Club’ locally and nationally for the economic role it played as part of a touring circuit and for distributors and retailers of independent music. During its lifetime, the club showcased bands associated with the C86 collection issued by NME (Primal Scream, Fuzzbox, The Mighty Lemon Drops), the emergence of a group of ‘grebo’ bands from the Black Country (Pop Will Eat Itself, Ned’s Atomic Dustbin), the so-called baggy scene (Charlatans, James etc.) as well as many others.

As a central feature in an alternative music scene, at the intersection of several subcultures, the ‘The Click Club’ had enormous cultural value for its participants which perhaps outweighs its economic role. As demonstrated by so many online archival sites and by the Click Club Facebook group particularly, such scenes and venues have proven important to individual and group memory and identity.

This exhibition surveys the nature and value of ‘The Click Club’, locating it within the context of a wider set of cultural and economic activity. The exhibition enlists participant accounts in order to contextualize ‘The Click Club’ as a historical moment that remains important to its community and to the music and cultural heritage of Birmingham.

Please note our opening hours are: