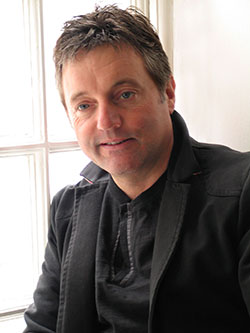 A Birmingham music composer and producer best known for his work on television theme tunes is to be honoured at a Birmingham City University awards ceremony next week.

He composes music across a range of programmes including news, current affairs, wildlife, entertainment and TV commercials.

David also co-wrote the current anthem for the Barclay’s Premier League and arranged and produced a Medal Ceremony version of ‘Chariots of Fire’ for the London 2012 Olympics..

He began his career working part-time at BBC Radio Birmingham (now BBC WM) and in 1981 became a location sound recordist for Magpie Film Productions. Working in a relatively new area of electronic and synthesised music production, David developed a strong interest in music composition and studio production, enabling him to develop his career as a television composer.

Away from television, David’s music single ‘Would You…?’ under the artist name Touch and Go was a top three hit in the UK in 1998, with the album ‘I’ve Noticed You Around’ spawning more hit singles in Eastern Europe and Russia. The follow-up single, ‘Straight…to Number One’ was chosen by Apple to launch their iTunes site in the USA.

“I’m thrilled to have been chosen to receive this honour for doing something I love and it’s extra special as it's from my own hometown university, which I myself attended for 3 years after leaving school”, said David.

“I hope in some way that I can inspire the graduates who are getting their awards and who are at the beginning of their careers.”

David will receive his honorary doctorate degree from Birmingham City University at a graduation ceremony on Tuesday 4 March.