Top 10 TV moments of the decade 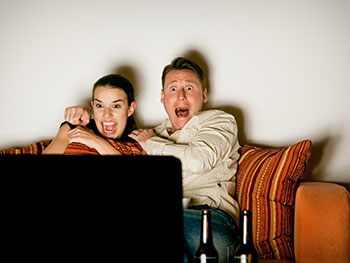 Birmingham City University’s Dr Vanessa Jackson reflects on some of the biggest TV moments of the decade and discusses what made them so memorable.

As one decade ends and another is about to begin, it is the perfect time to reflect on some of the key events of the last 10 years. TV has continued to be the platform that brings us these shared moments of significance, and indeed the last few years have seen a resurgence in TV, meaning that we are living in what seems to be a golden age of television.

In no particular order, here are my 10 TV highlights from the last decade, including those from sport, culture and politics:

The 2012 London Olympics proved to be TV gold, with an estimated 900 million people watching the stunning opening ceremony worldwide. The four-hour extravaganza featured the Industrial Revolution, the NHS, culture and music and included the Queen escorted by James Bond! But this ceremony was arguably trumped by ‘Super Saturday’, an electric evening of British success when Jess Ennis-Hill, Greg Rutherford and Mo Farah all won Gold within 44 minutes of each other.

Over 26 million viewers watched the wedding in Westminster Abbey of Prince William and Catherine Middleton. Kate’s dress, by Sarah Burton at Alexander McQueen, was one of the main attractions. The lace bodice inspired bridal gown copies across the country, and Pippa Middleton in her slinky bridesmaid’s dress, also by Sarah Burton, was another talking point.

HBO’s Game of Thrones is one of the hit series that has defined the current golden age of television, with its epic storylines and cinematic production values. Perhaps the most shocking episode was the infamous Red Wedding, the climax of series three. The audience was lulled into a false sense of security as the Starks enjoy the wedding feast at House Frey, only to discover that the Freys are wearing chainmail under their wedding clothes. A massacre ensues, leaving main characters Robb and Catelyn Stark, and hundreds of Stark soldiers, dead. Viewers were left in shock.

Prime Minister David Cameron expected the EU Referendum to return a vote for the UK to remain in Europe, but the electorate’s decision to leave the EU unfolded live on TV as the results came in over the night of 23/24 June. As the polls closed, the Remain camp seemed convinced of victory, but as the night progressed the true position began to emerge, causing the biggest one-day fall in the value of the pound, and the resignation of the Prime Minister.

The second series of Sherlock ended with the dramatic ‘death’ of Sherlock, played by Benedict Cumberbatch, as he leapt from the roof of St Bart’s hospital in London in an attempt to save his friends from a team of assassins controlled by his nemesis, Moriarty. We see him hitting the pavement, and being carried away by paramedics. He has no pulse and a severe head injury. The audience is left wondering if this really is the end for Sherlock, and if not, how the show’s creators, Steven Moffat and Mark Gatiss, can bring him back from this? We had to wait until 2014 for the deception to be explained.

After the horrific scenes of the Manchester Arena bombing in May 2017 which resulted in the deaths of 22 concert goers, Ariana Grande’s One Love benefit concert reasserted our faith in human nature. Ariana Grande was joined by a host of stars, including Justin Bieber, Coldplay, Miley Cyrus, Liam Gallagher and Robbie Williams. Proceeds from the concert went to the We Love Manchester Emergency Fund, helping the victims of the atrocity. The concert was shown live in around 50 countries and was streamed live on YouTube, Facebook and Twitter. It showed the power of television to do good.

England won the Cricket World Cup for the first time in a ‘Super Over’. Both New Zealand and England had scored 241 runs at the end of the 50 over match after a brilliant final over from Ben Stokes. This meant that the World Cup title would be decided in a Super Over – the rules of which everyone seemed a bit vague on. Stokes proved to be England’s hero, alongside Jos Buttler, scoring 15 runs (which helped him win the BBC’s Sports Personality of the Year this year). New Zealand were then held to 15 runs by Jofra Archer, and England were victorious due to hitting more boundaries.

In the final episode of Blue Planet II, David Attenborough delivered a shocking environmental wake-up call to us about the impact of plastics polluting the world’s oceans. We saw dolphins playing with plastic and seabirds feeding plastic to their chicks. It was heart-breaking to see the damage that we have caused to some of our best loved sea creatures. The message resonated with viewers, motivating us to reduce our plastic waste. It illustrated the power of television to instigate positive change.

Some of the most memorable TV moments are the accidental ones, like when Prime Minister Gordon Brown was recorded calling labour supporter, Gillian Duffy, a bigot in an unguarded moment. It was during the 2010 general election campaign, and Gillian Duffy, a 65-year-old widow, had stopped to chat to Gordon Brown about debt and immigration. When he got back in his car, Brown called her a bigot to an aide, unfortunately for him, he was still wearing a Sky News microphone! The recording went viral and an embarrassing climbdown and damage limitation exercise followed.

In July 2013, Andy Murray ended the 77 year wait for a British men’s Wimbledon champion in a straight-sets win over Novak Djokovic, a feat which had seemed impossible for so long. It was a tough match lasting three hours and 10 minutes. 17.3 million viewers watched Murray’s victory. Murray repeated his Wimbledon win in 2016.