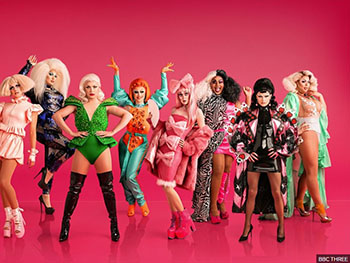 John Mercer, Professor of Gender and Sexuality at Birmingham City University's School of Media, discusses drag culture and its acceptance into popular consciousness, ahead of the first RuPaul’s Drag Race UK broadcast.

It’s been confirmed that BBC Three will stream the launch of RuPaul’s Drag Race UK on 3 October. Alongside Jamie Hakim at the University of East Anglia and Charlie Sarson at Birmingham City University, I’m editing a special edition of the journal Celebrity Studies devoted to RuPaul’s Drag Race and the cultural politics of fame, so inevitably this was welcome news for me and my colleagues.

This latest addition to the Drag Race franchise consolidates the runaway success of a show that reputedly nobody wanted to commission back in 2009. Eleven series and nine Emmys later, alongside four series of Drag Race All Stars, Drag Race Thailand, with a recent announcement of Drag Race Australia for 2020 and Drag Race Canada, RuPaul has become a global celebrity and ambassadress for a very particular (and lucrative) version of drag culture.

It’s quite possible then to argue that the success of Drag Race is evidence of a mainstreaming of drag.  However for UK audiences at least, drag has been a mainstay of popular culture since at least the 19th century through pantomime and musical hall and has a history that stretches back further still in theatrical ‘travesti’. In fact, drag is a form of entertainment that has a long and complex cultural history that takes in opera, pantomime, musical hall, vaudeville, popular television and gay rights activism and one that has a very distinctive flavour in different geographical territories. The glamorous drag of Danny La Rue designed to amuse a middle-brow 1970s television audience is far removed from the radicalism of the Cockettes in the 1960s. It’s as easy to contrast Dick Emory’s sexist drag skits with Divine in the 1970s or even Paul O’Grady’s acerbic Lily Savage in the 1990s to the New York subculture of Paris is Burning.

Instead of this cultural and historical complexity and diversity, RuPaul’s Drag Race offers a polished, commercialized and commodified drag ‘experience’ for the 21st century consumer. The franchise has been able to flourish in large part due to the changing landscape of media production and consumption. Video streaming services that air the main programme and fan interaction via social media, supplementary online programming like Untucked, the podcast What’s the T, fan commentary on Youtube and Twitter, drag conventions, drag tours, (all of the things that in cultural studies we describe as ‘paratext’) have become as important as the core programming for making meaning out of Rupaul’s drag universe.

In an article in the Guardian in 2018 RuPaul describes drag as a “big f*** you to male dominated culture”, nodding to the relations between drag and gay rights activism that started with the Stonewall riots in 1969. So it’s perhaps ironic that Drag Race seems to be an entirely un-ironic celebration of the USA and American neoliberal values and ethics more generally. Success is achieved through individualism, competition and hard ‘werq’ tested through a series of challenges and the contestants’ ability to reveal their ‘realness’ according to the therapeutic ethos of the programme and finally bestowed through induction into the drag superstar hall of fame. Within the context of Brexit Britain and the significance of our relations with the USA this adds a layer of frisson to the Drag Race UK launch. The film historian Lawrence Napper for instance recently pointed out to me that the British iteration of the show can be seen as ‘basically a colonisation - a land grab on UK gay culture.’

In fact, Drag Race has attracted more than a little criticism in its eleven year run especially in recent times due to some of the gendered, sexual and racial politics that the show inevitably connects to.  The presentation of exaggerated comic parodies of black femininity has been called out as racial minstrelsy for instance and in 2018 RuPaul’s own comments suggesting that any trans woman would ‘probably not’ be allowed to be a contestant on the show provoked a backlash and a hastily tweeted endorsement for the trans community from the star. Alongside this RuPaul’s commercial ambitions have attracted social media criticism of selling out and exploitation of audiences and contestants alike.

Over and above the extravagant costumes and salty retorts, I think what Drag Race perhaps does illustrate and what we can regard as positive in the continued success of the franchise is the extent to which certain types of queer identities have become accepted (and perhaps assimilated) into popular consciousness and the broad church of popular culture.

Open and frank discussions of gay identity and gay sexuality remain a core feature of the programme as has been the revelation of lived everyday experiences of homophobia, racism and prejudice against people living with HIV. RuPaul’s Drag Race is first and foremost addictive entertainment and an international phenomenon that through humour, colour, costume and performance provides a space to explore contemporary sex and gender politics and dramatizes those tensions as they have played out over the past decade.