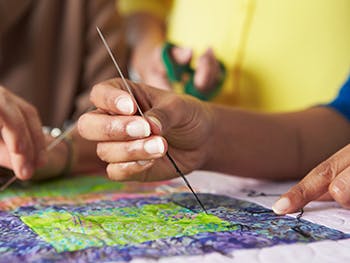 People of colour working and creating in the UK’s craft sector have been hit by racist behaviour and micro-aggressions, new research has found.

Studies carried out by a Birmingham City University academic has uncovered how people have been made to feel like outsiders in professional craft, with initial findings highlighting racialised incidents in craft spaces such as fairs and studios.

After conducting research in the UK for two years In collaboration with Crafts Council UK, creative industries researcher Dr Karen Patel has secured follow-on funding worth over £200,000 from the Arts and Humanities Research Council to expand the studies globally, which will include work in Australia focussed upon social enterprises, community organisations and exploring inclusivity practices.

“During my research and interviews with craft workers, I have met creative makers who say they have felt dehumanised by some of the experiences they have encountered,” said Dr Patel.

Many participants have further realised the unacceptable nature of such behaviour since the resurgence of the Black Lives Matter movement.

‘We don’t want brown people here’, one craft maker was told at a fair in the North East of England, whilst others reported being interrogated about their religion, with one maker being asked ‘You’re not a Muslim are you?’ by a fellow studio holder.

According to Crafts Council UK, there are an estimated 129,000 people working in craft occupations.

“Craft has become so popular now, but it is incredibly tough to work in craft and particularly if you are from a marginalised group,” added Dr Patel.

The experiences of makers of colour in the craft sector can be heard in the Maker Stories podcast series produced during the first phase of the project.

Rosy Greenlees, Executive Director at Crafts Council said: “This is an important study and we are privileged to be a Birmingham City University partner. The findings inform our commitment to use Crafts Council programmes of activity to promote a different narrative: one that challenges institutional racism and inequality and one that champions social justice.”

Dr Patel will discuss her research highlighting the lived experiences of makers from ethnically diverse backgrounds in UK craft at an online event with Crafts Council on 29 June. For more information and to book tickets, visit craftexpertise.com.