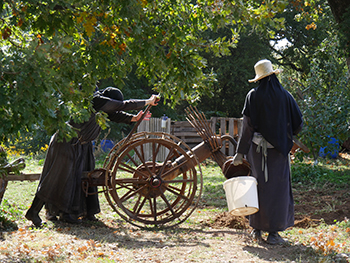 The documentary, created as part of Rachel’s final-year project, hosts a unique community of Orthodox nuns from across the globe that have made a 500-year-old mountain monastery in Greece their home. It allows listeners a unique insight into the secluded community of tenacious and committed women as they work the land and serve God; their way of life a challenging and inspiring mix of intense faith, physical isolation, and frontier spirit.

To create Our Daily Bread, Rachel lived as part of the community for a year and got to know the monastery by working on a farm there in her holidays. Her respect for the nuns and the lives they lead led Rachel to produce a piece about monastic life for her final project on the MA Media Production course.

After completing her MA, she heard about an upcoming commissioning round for religious programming on the BBC and took the opportunity to submit her work. The BBC World Service decided to commission Rachel’s documentary for Heart and Soul on the World Service, with some reworking of the content.

When asked about her project and the broadcast, Rachel remarked that it has been a fascinating process. She added how happy she was with the final piece, which she sees as a collaboration between herself, the nuns, her tutor and the production team at the BBC.

Being broadcast on the BBC World Service wasn't something I expected from a university project, but it has definitely made all the effort worthwhile. I was supported throughout the evolution of the project by my MA tutor Sam Coley. He gave me a lot of valuable feedback on the content, and encouraged me to keep going when I thought it might be too hard!

BBC World Service is an international multimedia broadcaster, delivering a wide range of language and regional services on radio, TV, and online.  It reaches a weekly audience of around 279 million people around the world and operates in more than 40 languages around the world from Pidgin to Korean, with new and expended bureau in locations Cairo to Seoul, Belgrade to Bangkok.

The School of Media encourages students to create ‘real world’ projects, so I’m delighted that Rachel’s documentary will have the audience it deserves. It’s a very intimate production that really draws the listener in. It’s great to see the BBC World Service recognising her hard work and creativity.

Our Daily Bread will be broadcast on Friday 23 August and you can listen to it here.

To find out more about MA Media Production take a look at our course page or join us at our Open Day on Sunday 24 November.