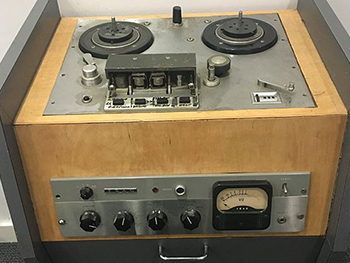 The Charles Parker Archive was formed in honour of Charles Parker (1919-1980), a BBC radio producer who specialised in documentary radio. After joining the Navy during the Second World War, Parker went on to study a degree in History before relocating to Birmingham in 1954 where he began working at the BBC as a radio features producer.

Parker was described as giving a voice to the working classes and  did his most famous work on the development of radio documentary techniques through the BBC, forming his “Radio Ballad”.

The radio editing desk is now stationed in the City Centre Campus. The Trust say they are “delighted that the desk now has a permanent home in a place where radio students can appreciate the equipment and skills needed to create programmes before the advent of computer software”.

Associate Professor in Radio Production Sam Coley said: “Parker’s editing desk is an iconic piece of UK radio history and we’re grateful to the Charles Parker Archive Trust for allowing BCU to be its new home.

Parker’s editing desk is an iconic piece of UK radio history and we’re grateful to the Charles Parker Archive Trust for allowing BCU to be its new home.

“The desk takes pride of place directly outside our radio studios in The Parkside Building. For students, it’s a reminder of Birmingham’s radio legacy and provides a link to past production practices.”

If you’re interested in seeing the desk and the rest of our facilities, join us at an Open Day to find out more about our courses and take a look at where you could be studying.