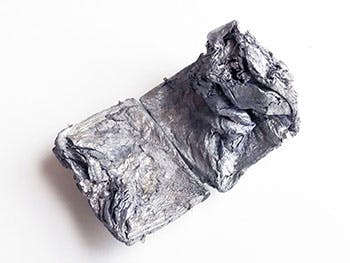 Chien-Yu Liu, a graduate from the MA Jewellery and Related Products 2019 has been awarded the Joya Prize at Athens Jewellery Week.

Athens Jewellery Week is in its fifth year and is establishing place within the pantheon of jewellery events and festivals, most famously in Munich, but also Barcelona, Amsterdam, Bucharest and New York. This year, however, putting on an international jewellery fair has been accompanied with significant challenges and the organisers – the Anticlastics team of Erato Kouloubi and Niki Stylianou – have adopted a defiantly political tone and taken their fair online, with a programme of talks, workshops and presentations.

The focus of their November event has been on providing both support and a place for healing for minorities and vulnerable groups. It was within this context that the Joya prize was awarded to Chien-Yu for art jewellery with a political theme, chosen by a committee which included jewellery luminaries, including the Anticlastics team, Christoph Zellweger, Jorge Manilla and others.

Chien-Yu’s prize-winning brooch entitled Breathe was part of her graduate collection at the School of Jewellery. The collection was made in a process that followed the arc of her recovery from a period of loss, after suffering a series of bereavements. Adopting a new material – aluminium – she developed and refined her forging skills. Initially her hammer blows were brutal, draining and numbing, but gradually she worked through her grief and her hammer work became more sensitive and nuanced, until eventually she worked with great delicacy with aluminium in foil form.

Chien-Yu describes how the material is layered back and forth until it becomes solidified through the process of handling: “I attempt to manifest the various processes of experimenting in the lightness of metal through hammering. The process is contemplative, and this triggers me to be attentive to the essence of the preciousness relying on metaphysical and artisanal efforts.”

Chien-Yu is currently based in her native Taiwan and is employed in a company producing adornments in jade. She continues to develop her own creative practice, and describes herself as a “metalsmith who works in interdisciplinary contexts across jewellery, silversmithing and photography. Based on the manual techniques of metalworking, I am interested in responding to the ephemerality through the meditative progress in durational material working processes.”

The MA team are delighted to congratulate Chien-Yu for her achievements and look forward to watching the developments of her career with interest.