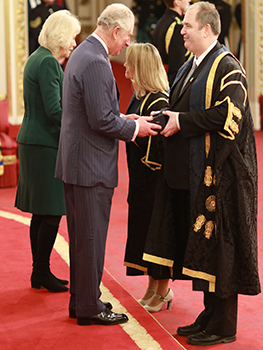 HRH Prince of Wales has presented Birmingham City University with a prestigious honour recognising the long-standing history of innovation at its historic jewellery school.

The University was formally presented with a Queen’s Anniversary Prize in recognition of its School of Jewellery’s contribution to the craft during a special ceremony held at Buckingham Palace. The award – the highest national honour available for UK further and higher education institutions – was collected by Professor Philip Plowden, Vice-Chancellor at Birmingham City University and Pro-Vice-Chancellor and Executive Dean of the Faculty of Arts, Design and Media Professor Alison Honour, as part of formal proceedings at the Palace.

Founded in 1890, the University’s School of Jewellery provides courses such as silversmithing, horology and gemmology at its home in Birmingham’s historic Jewellery Quarter.

The Queen’s Anniversary Prizes are awarded to recognise outstanding work by UK colleges and universities, which show quality, innovation and deliver real benefits to institutions and the wider world.

Professor Philip Plowden, Vice-Chancellor at Birmingham City University, said: “This is a truly proud moment for our University.

“The Queen’s Anniversary Prizes pay tribute to excellence, innovation and public benefit, and as the highest national honour available to universities, are renowned across the globe. Our School of Jewellery has a proud history. Based in Birmingham's unique Jewellery Quarter for almost 130 years, it has an international reputation which has not just seen us provide valuable education for the jewellers of the future, but also play a leading role in restoring treasures of our national heritage such as the Staffordshire Hoard.

I would like to thank Her Majesty the Queen for presenting us with this Prize which we are all delighted and humbled by in equal measure.
Professor Philip Plowden, Vice Chancellor, Birmingham City University

“I would like to thank Her Majesty the Queen for presenting us with this Prize which we are all delighted and humbled by in equal measure.”

The Queen’s Anniversary Prizes are granted by the Queen every two years, with the School of Jewellery’s award forming part of the 13th biennial round of prizes for 2018-20.

Opened 130 years ago, the School of Jewellery was created to provide an exclusive facility for the jewellery making industry. Homed at the heart of Birmingham’s Jewellery Quarter, the School has helped to train thousands of jewellers in an array of disciplines including operating a unique Horology degree course.

In 2018 experts from the School supported efforts to produce two reconstructions of a high-status helmet contained within the Staffordshire Hoard. More than 4,000 precious fragments of the 7th-century treasure were meticulously repurposed over the course of 18 months using both cutting-edge technology and ancient craft techniques, as part of a major research project funded by Historic England.

The School has also won a range of accolades celebrating its role in the city and Birmingham’s long-standing history as one of the UK’s main centres of jewellery making.