What You’d Normally Find in the All That Glitters Studio

Last summer our exhibition space played host to the All That Glitters crew and was transformed into a working studio, but normally it’s a place for our jewellery students, staff and Artists in Residence to showcase their work.

Throughout the year, we hold various exhibitions including our annual graduate show, Inspired Festival. We’re taking a look back at some of our favourite Inspired Festival pieces from over the years…

In 2016, Katy showcased her collection of decorative rings and holders inspired by popular children’s stories and fairy tales. Influenced by the likes of Alice in Wonderland, Rapunzel and James and the Giant Peach, Katy combined this with her teenage fascination with coins to create a selection of intricate jewellery artworks.

"Each ring can be held in a decorative holder in which it can merge into and form a sculptural piece of artwork when it isn't being worn. I want my customers to be able to wear the best chapters of their lives."

Since graduating from BCU, Katy has returned as a lecturer on our BA Jewellery and Object course and the HND Jewellery and Silversmithing course, as well as running her own successful business as a Jeweller/CAD designer. Find out more about Katy here.

Whisk earrings and a chopping board necklace were amongst items created by Yonghui as part of her final project on our Jewellery and Related Products course in 2018.

Yonghui who hails from Shanxi in China, presented ‘Jewellery in the Kitchen’, a collection of wearable and functional kitchen utensils including walnut and silver plated spice jars and a measuring tool necklace.

“I explored the communication between food and people during cooking and found it particularly interesting to see how people use kitchen utensils as tools to communicate with food.”

In 2017, postgraduate student Shuming Chen was recognised for her innovative eyewear designs, inspired by what she calls a ‘lack of freedom’ in today’s society. She saw her work showcased at London Fashion Week after being spotted by menswear designer Harry Xu.

Describing her ‘Monitoring in the Dark eyewear’, Shuming said: “People cannot guarantee whether their privacy is protected anymore and humans lack freedom in our society today.

“In my work I attempt to combine daily life with the science and technology of the future. I exaggerate issues that happen around us to envision what may happen in the future and I like to investigate the effects of modern technology on people.”

In 2015, Jewellery and Related Products student Olivia Hawley took ‘upcycling’ to a whole new level with her jewellery collection made from unwanted human hair.

Inspired by her love of hair and all things creepy and disturbing, Olivia’s collection included brooches, necklaces and rings, comprising metal and real human hair. The collection was designed to challenge society’s perception of beauty, and play on people’s reactions around hair removal.

In 2021, Yaling Weng created a collection of jewellery entitled ‘Hi Pets’ and was based around creating memorials for pets. Doing so, she incorporated pet hair into her designs.

Yaling said: “Memorial jewellery is not limited to expressing grief. It is also a beautiful expression of people’s love. Because hair is not perishable and can be stored for a long time, it symbolizes the love that transcends death and lasts forever in the token of love.” 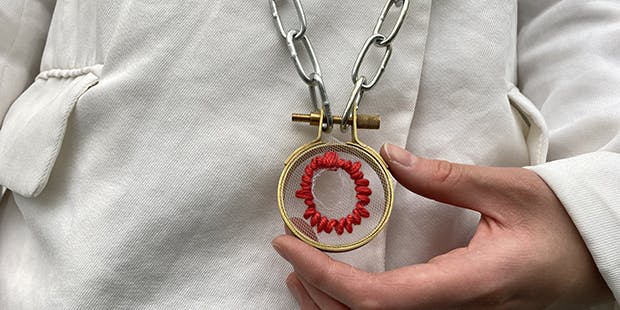 Abigail’s work showcases the importance of gender equality through an interactive element. Peers are invited to ‘break the hymen’ of the jewellery, symbolising the depiction of virginity in Chinese culture.

Describing the design process, Abigail said: “Embroidery is the main element used, which I consciously chose as the craft has developed with feminism and was once seen as a domestic skill rather than art, similar to how women were seen as the second gender.”

Find out more about All That Glitters

All That Glitters Episode One: Single Earring

10 Things You Didn't Know About the Jewellery Quarter

A Day in the Life of a Gemmology Student