This week’s episode of All That Glitters showed us new techniques from drawing wire to a specific size to taking solid metal into a molten form and into new cast shapes.  We saw the jewellers create long collar chains in the Best Seller challenge and sweetheart brooches for the Bespoke challenge.

The seven remaining jewellers had four and five hours respectively to create their pieces for this week’s show and again we saw the pressures of the time limits, however they all did amazingly well and took the challenge in their stride. When asked what he would do for the chain challenge, judge Shaun Leane replied: “Go on holiday!”
These challenges are set to push the jewellers out of their comfort zones and give them the chance to test new skills such as enamelling, something jeweller and contestant Dan Musselwhite might not be taking up again in the near future!

The first challenge saw jewellers using multiple ways of doing a similar job to take their short stock of wire, only 50cm of 3mm wire, down to enough length to create the collar of their design.

As with most processes in jewellery making, there is more than one way to get the final outcome. The draw horse seen last night gives the wire a high shine finish and jeweller Sonny Bailey-Aird’s method of forging the wire gives it texture. Draw horses or draw benches use either hardened steel or a wooden block with holes of set sizes which allow the jeweller to pull through the wire, initially squeezing the metal’s molecules together tighter, giving it strength and also additional length. The sharp edges of the block and the subsequent friction create a smooth, almost polished finish to the wire, which will need to be heated to relax the molecules and make the wire workable again or to allow the wire to be drawn further. 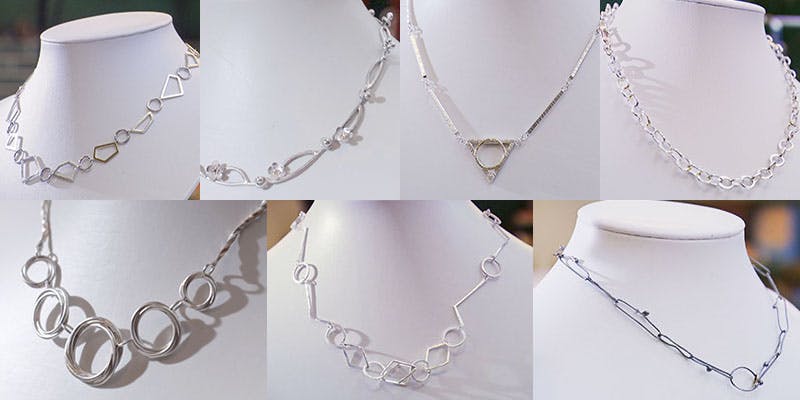 Sonny’s method works in a similar way, using the hammer to move the metal into a thinner profile. It’s similar to the methods of ancient swordsmiths or iron workers. The process takes longer due to the manual aspect of the work and leaves a rougher, textured finish to the piece. Both methods require fairly inexpensive tooling to get started and are easy to learn for new comers to the trade.

Another way that would take more investment to get started, would be using rolling mills with grooved rolls to force the metal down in dimension and give it further length. Rolling mills have many additional uses, some of which we will see as the series progresses.

Did you know there was a difference between a collar chain and a necklace? As with tools, processes and finished pieces, many jewellers have many names or phrases for the same thing. I will always remember a previous member of BCU lecturing staff, Sally Collins, calling a planisher a ‘boffer’ and I’ve used that name ever since - with students given its proper name for future reference of course! The same is done by jewellers describing pieces of finished jewellery. Some differences even occur on the same street between two or three shops, so we understand some of the jewellers’ confusion here.

On day two of this week’s episode, the jewellers were given five hours to create a bespoke sweetheart brooch for a Forces Radio DJ’s wife to take with her on tour whilst he stayed at home and looked after their daughter Holly.

In this challenge, the jewellers were asked to add colour to their pieces and wanting to impress the judges, a number of them took additional risks such as adding powered fine glass to their silver pieces to create enamel – a hard and durable smooth finished glass layer on top of the silver. Not without its ‘fun’ in the process, and even more so if you’ve never used the process before, as we saw mistakes take only split seconds in the world of jewellery. But as judge Shaun stated, “a good jeweller finds their way past their mistakes.” 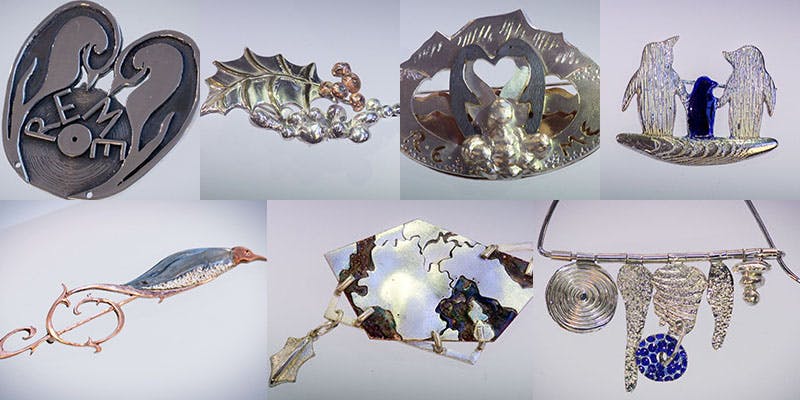 Thankfully we don’t yet have ‘smell-o-vision’ because the smell created by cuttlefish casting is awful and the mould can only be used once. But, as we saw, the process is quick, cheap to do with only minimal tooling required and the possibilities are almost endless.

My preference for home casting would be the process of sandcasting, a process used widely in many studios across the world, mainly due to the reusable sand and much sweeter scent when the molten metal is poured.

Would you have picked the same winner? Is your favourite jewellery still in the competition? Are you itching to get your hands on some tools and give jewellery making a go? Find out more about joining us at the School of Jewellery.

Read more about All That Glitters

What can I do to prepare for my course at the School of Jewellery?

All That Glitters Episode Three: Pearl and Chain Necklace

5 things to do in the Jewellery Quarter