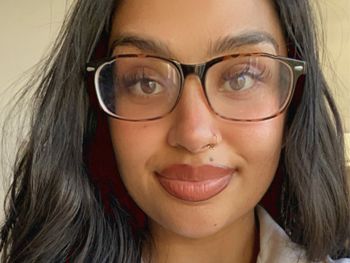 A Birmingham City University nursing student who received life-saving treatment for liver disease has set up a support group for young people similarly affected – with the nurse who helped look after her and who also overcame a critical liver condition.

Sherniece Kaur was just a few weeks into her degree in Adult Nursing at the University in 2018 when she fell seriously ill.

After being diagnosed with Budd-Chiara Syndrome, a very rare disorder of the liver and blood vessels that affects around one in a million people, the 25-year-old from Birmingham was rushed to the city’s Queen Elizabeth Hospital for emergency treatment and put on the list for an urgent liver transplant.

Among those looking after Sherniece while she was in hospital was staff nurse Amy Davis, 27. With a mutual passion for the profession, the two immediately hit it off and Sherniece discovered they both had something else in common – Amy was also affected by liver disease, having had biliary artresia, a condition which causes scarring and blocking of the bile ducts outside and inside the liver.

After 10 months of treatment and having resumed her nursing studies, Sherniece found herself back at the Queen Elizabeth Hospital in the very same liver ward where she was treated but this time working on placement. During her stint at the hospital last October, Sherniece was mentored by none other than Amy, who is now a ward sister.

As a result of their shared experience and now fully recovered following life-saving transplants, the two women have kept in touch and helped set up the Birmingham Liver Youth Support Group, through which those who have had or those living with liver disease share their experiences.

Members range in age from 15 to 24 years old and meet to discuss what they are going through, offer advice and encouragement to each other, and to just generally chat and socialise. They also have talks from specialists and other invited guests on topics like the latest research and treatments, and fundraising initiatives.

Among the group’s members is Birmingham City University nursing graduate, Olivia Price, 29. Like Sherniece and Amy, Olivia has also overcome liver disease, and she now works in a liver intensive care unit.

Sherniece, who is in the third and final year of her nursing degree and is due to graduate this September, said:

“I’d only just started my course when I fell ill. My ankles swelled up, my stomach felt bloated and I was throwing up constantly. I knew something was seriously wrong when I turned bright yellow. It turned out my liver wasn’t working properly and no toxins were leaving my body. As a result, I was told that I needed a new liver.

“It was a frightening experience but one of the things that really helped me through it all was the care and support I received from Amy and others. As she’d gone through something very similar to me she knew exactly how I was feeling. When I recovered and finally restarted my studies, I was thrilled to find myself on placement in the very ward where I had been a patient, and working alongside Amy.”

Sherniece has returned on placement at the Queen Elizabeth Hospital and is hoping to work full-time on a specialist liver ward once she’s graduated. Eventually, she intends to train as a liver transplant coordinator.

“I want to turn what I went through into a positive by playing my part in fighting liver disease and helping those affected by it. The support group that Amy, Olivia and I are involved with is an extension of that. I benefited so much from being able to talk to people who really knew how I was feeling.

When you go through something as serious as liver disease, especially as a young person, you think you’re on your own. But you’re not and our group exists to let people know there are others like them who are here to lend a helping hand.
Sherniece Kaur

“Nursing training is intensive at the best of times so for Sherniece to have got back on track after what she went through is extraordinary. It’s given her a clear focus on the sort of nurse she wants to be and she’s incredibly hard working and dedicated.

"As you would expect from someone training to be a nurse, Sherniece also cares passionately about helping others, and having had liver disease herself, she has a really deep understanding of what patients with the condition are going through.”

The Birmingham Liver Youth Support Groups meets on the last Monday of every month at 6pm with meetings taking place via Zoom at the moment due to the Covid-19 lockdown restrictions.  The group can be found on Instagram by searching for @QEBLYS.