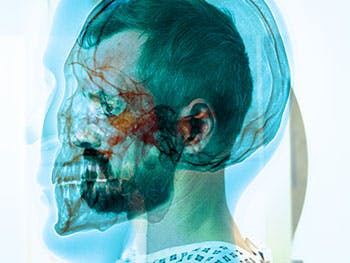 On World Radiography Day and the International Day of Radiology (Tuesday 8 November), a new film has been commissioned to coincide with the anniversary of the first medical X-ray performed in Birmingham 120 years ago.

‘X-Ray: The Unknown Quantity’ seeks to shine a spotlight on the UK city’s substantial contribution to world radiography, when in January 1896, the first medical X-ray was performed by Birmingham radiology pioneer Major John Hall-Edwards.

Hall-Edwards was a high profile public figure in the city at the turn of the 20th century and did much to advance scientific understanding of X-ray imaging as well as the prevention and treatment of cancer. Towards the end of his life, he lost his left arm as a result of radiation exposure and his amputated arm is now preserved in the collection of the University of Birmingham.

“Radiography remains one of the most important tools in modern medicine, enabling diagnosis and assessment that without the use of X-rays, imaging and ultrasound would otherwise be impossible. Birmingham Children’s Hospital alone performs in excess of 69,631 examinations each year. High-energy radiation also provides life-saving treatment in cancers and tissue disease.

The short film will be launched via the Birmingham Hippodrome website on Tuesday 8 November to coincide with World Radiography Day and the International Day of Radiology, a global day of celebration marking the anniversary of the discovery of X-radiation by German Physicist Wilhelm Roöntgen in 1895.

Staff from the Radiography Department at Birmingham City University took all the X-rays that appear in the film using the institution’s Digital Radiography (DR) X-ray facility and its phantoms – tissue equivalent models of body parts, that absorb and scatters X-radiation in a similar way to human tissues.

Undergraduate courses are offered in Diagnostic Radiography,Radiotherapy and Medical Ultrasound as well as a range of postgraduate modules and qualifications that can be studied to develop Advanced Practice through pathways including CT, MRI and reporting.

Helen White is Head of the Radiography Department at Birmingham City University. She said:

“We were delighted to work with Birmingham Hippodrome, Birmingham Children’s Hospital and the three talented artists on this digital project that fuses art and science in a truly innovative way.

“This evocative new dance film and sonic soundscape encapsulates the pioneering nature of Major John Hall-Edwards’ work 120 years ago, while allowing us as modern radiography professionals to view our discipline through fresh eyes.

The film is the perfect way to mark Birmingham’s substantial contribution to X-ray technology and, as the only provider of diagnostic radiography and radiotherapy education in the West Midlands, Birmingham City University is ensuring that the next generation of radiographers are best equipped to serve the people of the region, across the country and around the world.

Staff and students at Birmingham City University will be given a sneak preview of ‘X-Ray: The Unknown Quantity’ on Tuesday 8 November in the Seacole Building’s lecture theatre on its City South Campus.

Artists Hugh Turvey and Justin Wiggan will be in attendance at the screening to talk more about the creative processes involved in creating the film.

To complement the digital project, Birmingham Hippodrome have also commissioned a series of free, drop-in public workshops and talks taking place across the city throughout October and November.

View the trailer of X-Ray: The Unknown Quantity below: