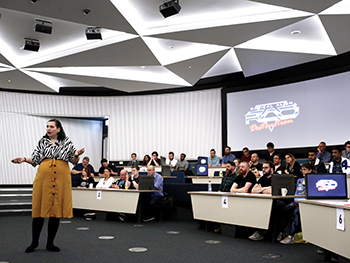 Industry professionals joined students and staff from the New Technology Institute (NTI) to celebrate students’ work and achievements at the NTI end-of-year showcase.

The showcase is a yearly event that brings together students from our undergraduate and postgraduate Video Game courses to present their final projects to the industry, and this year it also included a feature film created by MA Feature Film Development students. The event is a fantastic opportunity for students to network with industry, get valuable advice and useful feedback on their work. For some students, it has also led to placement and full-time work opportunities.

Taking place at our City Centre Campus, the showcase gave professionals from the game development and design industry a chance to get hands on with the games and talk to students about their work. Industry guests included representatives from global games companies such as Rockstar Games, known for major releases such as Red Dead Redemption and Grand Theft Auto, and more local ones such as Pixel Toys.

The Director of NTI, Oliver Williams, opened the event highlighting that it was his "favourite day of the year" and invited students to present their work in front of their peers, tutors and industry guests. He emphasised how important it is for students that their games are played and experienced by other people.

It is essential for students to see other people appreciating their projects and the event like this provides an opportunity for their work to be recognised not only inside the University but among industry professionals, too
NTI Director, Oliver Williams

Reflecting on the past academic year’s achievements, Senior Lecturer in BA (Hons) Video Game Development Zafar Qamar commented: "Truthfully, I just love watching students succeed and fulfil their potential - it’s really wonderful to watch that journey culminating in a successful event like this."

Both undergraduate and postgraduate students confidently stood up and took the audience through the journey of developing their projects. The presentations offered an impressive range of work including atmospheric gothic-style video game Aperture with horror elements, The Phoenix – an animated family film about the creatures of the streets of Paris in 1889 – and many more.

The presentations highlighted how students worked collaboratively to develop an advanced concept of a video game or feature film. Roles included programmers, production designers, artists and writers and the final products showed how everyone brought their own unique experiences and responses to their projects. As well as working with their NTI peers, some teams also worked with student musicians from Royal Birmingham Conservatoire to produce unique soundtracks and sound effects for their projects.

Joe Albanese, MA Feature Film Development student and a writer for animated feature film The Phoenix, said that, "working collaboratively with people from different disciplines has been very rewarding because you can get an insight of how it’s like to work in a team in the professional world. This year has been really eye-opening for me."

All of the projects presented were well received and industry guests congratulated the students on their professionalism and the quality of work produced. Associate Art Director Craig Anderson from NaturalMotion – a company that specialises in creating animation technology for game and film productions, was among the industry visitors who didn’t shy away from questioning students during the presentations and took the opportunity to try the newly produced games himself.

Before coming down from London to this event, someone I know told me that as soon as these graduates leave BCU they get snapped up by the industry straight away. So here we are looking to meet talented young people.
Craig Anderson, NaturalMotion

For many students the show is a great opportunity to network with experienced members of the industry. Birmingham City University graduate Liam Blunden – an experienced UI/UX artist from Pixel Toys – described the event as a much quicker and effective way of securing a job than sending out job applications, which often take a long process to reach the right people.

The event created a real sense of professionalism and community, wrapping up the NTI’s academic year. To find out more how you can build an extensive portfolio with support from our highly experienced academics visit the New Technology Institute course pages or join us at our next Open Day.