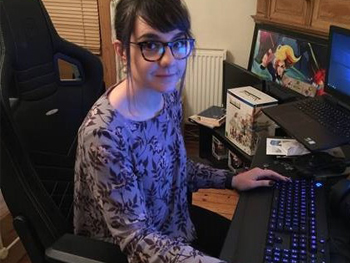 A Birmingham graduate has revealed how her time on a unique gaming course equipped her for a role developing one of the world’s biggest video games.

Cissy Biri, who graduated from Birmingham City University in 2016, is among the tech team behind Rockstar Games’ smash hit prequel, ‘Red Dead Redemption 2’.

The Western-themed game, which follows outlaw Arthur Morgan, has already proved a major hit with gamers and sold more than 17 million copies in its first two weeks.

Now the Birmingham graduate has revealed that her time on the unique Gamer Camp Biz Master’s course was crucial to her landing the position of Animation Production Coordinator for ‘Red Dead Redemption 2’.

During her time at the University, Cissy was given the opportunity to sharpen her skills in video game production and worked with a team to produce the ‘Xtreme Drone Racing’ game, which gave players the chance to race virtual drones in a series of different locations.

The Gamer Camp course is designed to equip students with the real-world skills needed to work among some of the world’s biggest games companies, and Cissy explained how it had been integral to preparing her for her role at Rockstar North, part of Rockstar Games.

Cissy Biri is from Athens in Greece and now based in Edinburgh. She said:

“My time at Gamer Camp Biz has had a big impact on my current role at Rockstar North. Having experienced project delivery and working in interdisciplinary teams helped me hit the ground running in my production career.

The production methodologies and best practices I studied have been indispensable while working on cutting edge technological projects of this scale and ambition.
Cissy Biri

“Gamer Camp Biz provided me with the tools I needed to not only get a job at a leading studio, but also to continue to learn and grow.”

“Year upon year we have a fantastic relationship with Rockstar Games; they recognise that the teaching and learning within Gamer Camp is of a really high industry-standard, so our graduates are able to hit the ground running at lightning speed.

“I am so very proud to know that several of our recent graduates, including Cissy, have already gone on to help shape ‘Red Dead Redemption 2’ become the global success it is.”