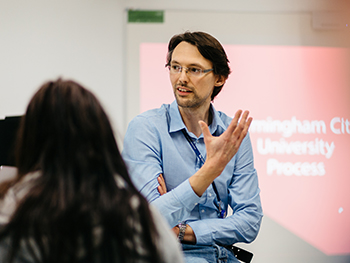 Oliver Williams is the Deputy Head of the Birmingham Institute of Creative Arts. Learn more about his background, his interests and what he enjoys about working for the School and the University.

What did you study at University?

I studied Marketing and Enterprise at undergraduate level and Learning and Teaching in Higher Education at Masters level.

How would you describe the School of Games, Film and Animation?

It’s an industry focused school - pioneering, challenging and fun. It’s a place where students can find and hone their specific skillset and learn how to utilise their abilities within a safe, studio-simulated environment which ultimately help them land employment within competitive sectors and thrive within a career.

What’s your favourite thing about working for the school?

I love every September when I meet the new cohort of students joining the school. I am met with a wave of energy, talent and enthusiasm. I really think it is good for the soul to work with young, motivated, talented people. It is also very rewarding to hear from ex-students once they’ve graduated, when they’ve landed their first job in the industry and are enjoying their success.

How would you describe your staff?

Obsessed with their discipline! Our staff live their specialist subject. A friend of mine described how when their dad came home and took off his police uniform he left his shift. It’s not like that with an academic from the School of Games, Film and Animation, we can’t switch off our passion and fascination with games programming,3D art, game design, marketing campaigns or film.

What have been your career highlights so far?

There have been a few. I ran my own web development and video production team at Screen Media Lab which was great fun. I launched a graduate scheme for BT within their Research and Development team at Parity Solutions and I worked on eight pioneering mobile apps back at the launch of the smart phones (2012) where we worked on tech which is pretty prevalent today, for example QR codes and location services. We worked on a proof of concept which didn’t make it out of concept phase back in 2012 but was very much like Pokemon Go! But my career highlight has been to found and grow the School of Games, Film and Animation, which started as an academic school in 2011, with only 16 students studying Gamer Development and it is now over 150, with students studying game development (code, art, design and production), film business and digital marketing and has world leading partnerships with Sony, Rare, Sapient Nitro, Mediacomm and many more. The success of the graduates is our greatest success, with students going onto to work for; RockstarGames, Creative Assembly, Ubisoft, Codemasters, BBC Creative, Essence Global, Thinkjam, Hanway Films, Truffle Pictures and many more.

Do you have any advice for working in the industry?

Graduates need to have a mix of broad skills; communication, working to deadlines, working collaboratively, working with clients and specific skills which will be different for each discipline. For example, 3D modelling or, marketing analytics, or C++ programming. In short be good at something and play nicely with others. In interviews, you’ll need to be keen, enthusiastic and convey you really want the opportunity. Employers want to see energy and drive from graduate recruits and they are put off by arrogance and cynicism so be upbeat. When you join, although you’ve just graduated you still need to show you are keen to learn from the company you’ve joined and the professionals you are working with. We never stop learning especially in video games, digital marketing and the film business.

How can future students prepare for university now?

Start to immerse yourself in your chosen discipline area. If you are a digital art student, draw, if you’re a game development student, code and if you are a game design and production student, play a wide variety of games, not just video games also card games and board games. Start to learn the mechanics of play. Digital Marketing students should pay attention to how brands attempt to communicate with their audience - what messaging do they use? What channels do they publish their content on? What are you doing? Where are you and what device are you on when you receive advertising content? Film Business students should not just watch movies (please do, blockbusters, indie and foreign films) but should start to consider the platform the films are distributed on; theatrical, Video on Demand, Streaming Service.