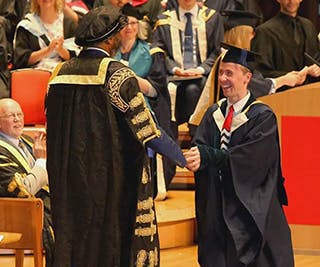 Studying a Master of Arts in Creative Writing

Former BA (Hons) English and Creative Writing student, Jack Roberts, answered a few questions for us about his time at Birmingham City University and what he has been doing since he graduated.

Hi Jack.  What course did you choose to study and why?

During my time as an undergraduate at Birmingham City University, I studied English with Creative Writing and achieved a first with honours overall. I’ve always been writing and always been interested in writing, but I actually got my place here through the clearing process. I didn’t do too well in my A-Levels apart from my English Language and Literature grades. It ended up being a blessing in disguise. I found a course that was better suited to my learning style and an approachable staff that pushed me to do my absolute best.

When you started university, did you know what you wanted to do as a career?

I had a vague idea of what I wanted to achieve. When you’re going into a creative writing course, it’s easy just to say “I want to be a writer”, but I knew that I wanted to particularly focus on screenwriting. However, the course also opened up doors to other avenues of writing that I could experiment with. The School of English always provided me with information on upcoming events, particularly poetry readings, talks with authors and screenwriters and extra classes such as smartphone filmmaking.

What is your current role?

Currently, I’m still at Birmingham City University, as I’m studying a Master of Arts in Creative Writing. It’s allowed me to really focus on screenwriting and has encouraged me to start gearing my writing toward publication and actually presenting it to a wider audience outside of the academic realm.

How has your life changed since you have graduated?

Since graduating, I’ve really been focusing on my MA. However, I also got a new job at my local video game shop back in my hometown to do alongside the MA.  As well as this, I started my own blog dedicated to writing reviews of vinyl records. This led me to then be asked to write a review for BrumLive about a Wolf Alice concert. I wanted to keep my writing fresh and current, so I make sure I frequently contribute to it. I expanded on the blog to include reviews of video games, films and television shows, so that I had more options to write about.

I still continue writing scripts in my free time too. Currently, I’m building up a store of film plans to be written once I have finished the MA and have begun the process of making a short film with some of my friends. Perhaps my biggest achievement since leaving Birmingham City University is having some of my poetry shortlisted and published as part of the Aesthetica Creative Writing Award. It was a poem called Orange (In Three Parts) that formed part of my 21st Century Poetry module’s final assignment collection. It was really unexpected and felt like a fantastic way to end my studying as an undergraduate. Something that I had worked so hard for was making its way out there and I had the teaching of my lecturers and support of my friends to thank for it.

What main skill from your university days will you take with you through your life?

University has been one of the most rewarding experiences of my life so far. In addition to the skills I learned during my time on the course in terms of writing, it also taught me the importance of being dedicated to your work. The harder you work at something you are passionate about, the greater the reward will be on the other side. From being scared about my future after my A-Levels, to being excited for it after university, I’m extremely grateful to have been a part of Birmingham City University.