Preparing students for life after graduation 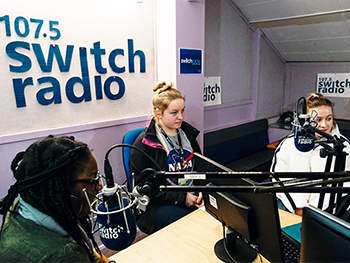 Final Year students were recently given the opportunity to take part in the Common Purpose event where they met successful School of English graduates and visited their workplaces. This event is part of a wider initiative to show students the possibilities in an industry they may not have even considered previously.

A number of graduates, each with a different story to tell, were invited back to campus to talk about their careers and give advice on how to prepare for the world of work. Students heard about the different career paths available to them from spanning the spectrum from actor, to local government and even radio presenter!

The event opened with a welcome speech from graduate Esmonde Cole who talked to students about his dream to become an actor. He explained how he dealt with backlash against his career choice from his parents who were concerned that acting wouldn’t bring enough money or stability. Students also heard from English Literature graduates Olivia and Nicole who are currently working on Local Government Graduate Scheme in Sandwell Council.

After the presentations, the students were taken for a tour of Switch Radio where English graduate Ashley Roberts has secured a job as a presenter and radio producer. The trip included the amazing opportunity to go live on air and talk about their day and future aspirations.

Afterwards, Ashley points out the importance of events like these: “Final year students can talk to recent graduates who have achieved some amazing things with their degrees. It is giving them a taste of a real life work experience.”

My recommendations to students is to take their time and experiment with career paths. Most importantly, find something you really love.

Before the event, final year student Chloe said she was feeling confused by the amount of choices she could do after graduating, but feels much more confident after the event:

“In university you get more out of it when you put more into it. If you attend the future events, talk to your tutors and career advisors, network with people then you will definitely have a clearer path that you might want to pursue.”

You have to find time to take advantage of what university offers and events like these really make me feel good about my future and keeps my mind open to where I could head towards in my career, and I also made great contacts!

“After today’s session I understand that it’s okay to not know what I want to do with my future after my studies; as long as I keep my mind open and keep trying different things, I will eventually find the right path for me. I was worried - what if I choose the wrong thing? However, I realise that it’s not the end of the world and I have to keep trying and keep testing new things until I find the right job for me. As a student who is quite uncertain of the direction to take with my degree, I found it particularly useful to hear from a range of different people.”