On Friday 16 February I attended the Verve Poetry Festival in Birmingham for the first time, courtesy of Birmingham City University (BCU) who had sponsored the event and offered free tickets to students. Staged amongst the hardcovers on the second floor of Waterstones Birmingham, it featured the poets Mir Mahfuz Ali, Karen McCarthy Woolf and Sasha Dugdale.

Jo Bell, chairing the event, opened by asking the three readers who their ‘desert island poet’ would be – and as Jo observed, each chose a poet reflective of their own talents and interests. Mir Mahfuz Ali named Rabindranath Tagore, admiring his ability to find depth in the simplest subjects, though regretting that translation does not do justice to his verse.

Sasha Dugdale chose Pushkin, another poet better appreciated in the original, who would offer many years of reading material, while Karen McCarthy Woolf preferred the more concise work of Louise Glück, commending her hypnotic, lyrical style built on a range of complex structures. Karen added that if she were to take a poet simply as a companion, though, her choice would be Joy Harjo, who after she heard Karen make wolf noises at a sound check invited her to travel to America, dance around a fire and howl at the moon together!

Remarking that sadness is easier to write than happiness, Mir Mahfuz Ali read with his distinctive whisper, the physical legacy of violent police suppression of the anti-war songs he had sung. His vivid descriptions of natural disasters and war in Bangladesh, where ‘cats and cattle lay dead on the ground’, evoked the beauty and sadness of loss. Exploring how pain and fear changes us in its expectation or denial, Mahfuz shared his memories of ‘The Day God Was Angry’, or how he longed ‘To Have My Sister Back’. Clarifying his earlier statement, Mahfuz explained that he first had to write through the darkness of his personal experiences in his first collection, and hopes to be able to explore happiness in future.

Karen McCarthy Woolf read next, a quirky contrast to the disturbing realism of Mahfuz, but no less poignant or perceptive. Rivers had been mentioned as a link between the three poets’ work, and An Aviary of Small Birds was introduced with the explanation that Karen had found water soothing following the stillbirth of her son, the subject of this collection. McCarthy Woolf discussed her work confidently, charismatically describing in ‘Voyage’ the fate of the ship Irpinia, which had carried her father to England from Jamaica, and ended up as a ’70s film set for Faye Dunaway – a fact she discovered during her residency at the National Maritime Museum in Greenwich.

Seasonal Disturbances, McCarthy Woolf’s second collection, draws together social and scientific observations with wit and precision that belies their political commentary. On approaching her final reading, she offered the audience a tantalizing choice of what she should read – ‘sex or cats?’ – but then went against the popular vote (sex, naturally!) and finished with ‘Variation (Untitled)’ on the life of London cats. The highlight, however, was a slick delivery of ‘The Science of Life 261’, in which she writes that ‘A man is really very like a frog…’. 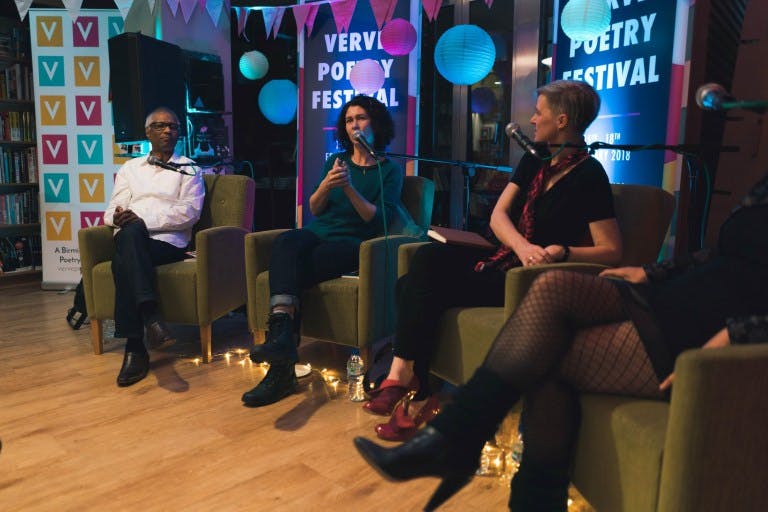 Sasha Dugdale concluded the readings with poems from her latest collection, Joy. She read an extract from the titular piece, which adopts the perspective of Catherine Blake after the death of her husband, the poet and painter William Blake. ‘Joy’ examines the experience of emotional (‘Give me my despair. / I wish and feel and weep and while I weep I delight. / I remember everything’) and physical loss (‘See my hands? Here. Look. / You said they were the hands of a craftsman. / Where to put them? (She rubs her body with them) They have never lain so long in my lap.’).

Dugdale moved on to another forgotten female – poor Mabel, who is little more than a reassuring comparison for Alice on her Adventures in Wonderland, but is given a life beyond duncehood in ‘The Ballad of Mabel’, where she can ‘dream her own dream’. She rounded off the evening with an unconventional ‘Valentine’s’, which had surprised her husband – more for her uncharacteristic celebration of the day than any amorous sentiments the poem holds.

The evening closed, and I prepared to leave, lingering for a few moments in the long queue and rapidly emptying tables of the poets’ books. As a newcomer to poetry, I came for the free ticket and an interesting evening out. I left with a greater appreciation for the breadth of style, form and voice that good poetry can manifest, and a couple more beautiful and quirkily signed books than I had intended to buy.

The Saturday night headline event at Verve Poetry Festival was chaired by Dr Gregory Leadbetter, the Director of the MA Creative Writing and the Institute of Creative and Critical Writing at BCU – pictured below with poets Hannah Lowe and Sandeep Parmar. (Photo credit: Thom Bartley)

An afternoon with Maria Ferguson