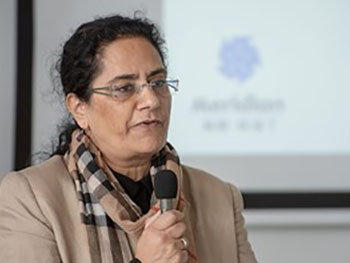 Professor Hanifa Shah has been appointed Pro Vice-Chancellor and Executive Dean of the Faculty of Computing, Engineering and the Built Environment (CEBE).

Professor Shah is already known to many across the University as she joined BCU in 2010 as the Associate Dean – Research at the Faculty, then known as Technology, Engineering and the Environment (TEE) after a successful academic career at Aston University and Staffordshire University.

Since her arrival, Professor Shah has worked together with colleagues to build on practice-based education with CEBE and to help translate this into successful research activities; frequently in collaboration with industrial partners.

Vice-Chancellor Professor Philip Plowden said: “It’s very pleasing that we have had the opportunity to appoint someone who has been such an ambassador for the Faculty, and for BCU more generally.

“Hanifa brings with her the deep knowledge of the Faculty’s strengths and challenges, so that the work to meet the Faculty’s ambitions can continue without a hiatus.”