From graduation straight into a Hollywood blockbuster movie placement 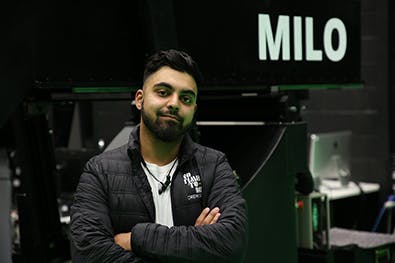 A Birmingham film production graduate who landed a role working on the latest James Bond blockbuster No Time To Die straight out of university is encouraging city filmmakers to ‘stay focussed, work hard and build confidence’ in order to achieve success in the screen industries.

Tayyib Mahmood, who graduated with a Bsc in Film Production Technology from Birmingham City University earlier this year whilst working as a porter for supermarket chain Asda, spent four months working as part of the Pinewood-based Studio Unit team on the new Daniel Craig film – set for release in April next year.

Participation in the British Film Institute Future Skills initiative led the 23-year-old graduate to become a mentor then course mentor for three consecutive years, sharing the knowledge and skills acquired during his time at university with new participants.

Tayyib, who hails from the city’s Sparkhill area - immortalised in BBC Three smash hit comedy Man Like Mobeen - puts his success in landing the 007 placement down to ‘staying focused, working hard and building confidence’ – and says that young or emerging screen professionals can achieve success by ‘chasing industry experience and contacts’.

“Studies were very challenging when I began my degree, although I soon realised it was a natural thing to experience when starting a course. I overcame my apprehension by just getting my head down and cracking on. The skills I learnt on my course – recorded on my CV - were critical to me landing the job on Bond 25.

I have accomplished what a lot of people would kill for - working on a Hollywood blockbuster film straight out of university, but I know that others can earn similar accomplishments through hard work and commitment.”

Tayyib, who also worked on dailies on Steven Spielberg sci-fi adventure Ready Play One – famously filmed on location in parts of Birmingham - credits his lecturers at Birmingham City University with equipping him with the skills and knowledge to work to a high standard on a major motion picture set, and believes the city’s screen industry community has huge potential."

“Birmingham’s film industry has some of the most hard-working individuals I have had the pleasure of working with, including Sheikh Shahnawaz, a Birmingham filmmaker and ‘one-man army’ who is shooting his first feature called ‘Bluff’; Mohammed Ali, an inspiring photographer who I use to shoot my BTS photography when I am making short films, and Nisaro Karim and Gurjant Singh who have a company called ‘Five Pence Productions’ making a series of short films in the city."

Birmingham is well on the way to becoming a central hub of filmmakers and screen talent – collaboration is definitely on the rise.