In conversation with our Hollywood VFX expert

If you want a flourishing career in visual effects, Senior Lecturer in Visual Effects, Lianne Forbes, can give you a fantastic insight into the industry. In this interview, Lianne tells us about her 14 years of high-end, VFX film industry experience working on Hollywood films such as Harry Potter and Star Trek and being part of the Oscar-winning team behind Hugo.

Can you tell us a little bit about your career before coming to teach at BCU?

I've been in industry for the last 14 years working at companies such as Framestore, Animal Logic, Pixomondo, to name a few. I started my career with Framestore initially in London and was lucky enough to move around the world with my job to Australia, China, Canada.

My focus has been mostly on match-moving or camera tracking and with that comes a lot of teaching and engaging new graduates, bringing them into the industry, getting them trained up and then moving them on into other departments. This created a natural progression for me to move into the academic world and teach full time. The fact I have been in industry so long is great for our students as they can ask questions and get some real life insight into what industry is actually like versus life in university.

The beautiful thing about the visual effects industry is that everybody has such a passion to be there. You're never surrounded by anybody who doesn't want to be a part of that world. The passion that comes from the creative side of jobs - I think that's just a really nice feeling. I had that at university when I was there and then to get that throughout my working career too, is quite incredible.

I imagine that this really helps to build a strong sense of community amongst people in VFX?

Yeah, very strong. I have got friends around the world from industry who perhaps I can bring in to talk to students. I've had teams where you've worked so closely for three months, working long hours, trying to hit deadlines and you rely on each other. You become very close to these people. It’s all about teamwork. You can be creative and be an individual while still being a good team member, and it's something that you start learning at university, which flows naturally into industry.

What were some of the most interesting things you worked on during your career?

Some of the highlights for me would be working on Harry Potter and the Goblet of Fire, the Half-Blood Prince and helping with the stereo conversion for the Deathly Hallows Part II. The other one that really springs to mind would be Star Trek: Into the Darkness. I was thrilled to work on a J.J. Abrams movie and this was a really difficult project to work on because he loves his in-camera lens flares and he does a lot of practical effects. So working with that and then enhancing was very tricky, but so much fun and the outcome of that was just beautiful to watch.

A more recent highlight was Fantastic Beasts and Where to Find Them. Seeing the work my team did on that was incredible. I also enjoyed Covenant, which was one of the harder projects to work on. Ridley Scott is an amazing director but he's very particular about how he wants things done and so actually made the post-production quite difficult for us. But again, it's nice to work on shows like that. So, yeah, I've been very lucky and worked on quite a lot of big movies. 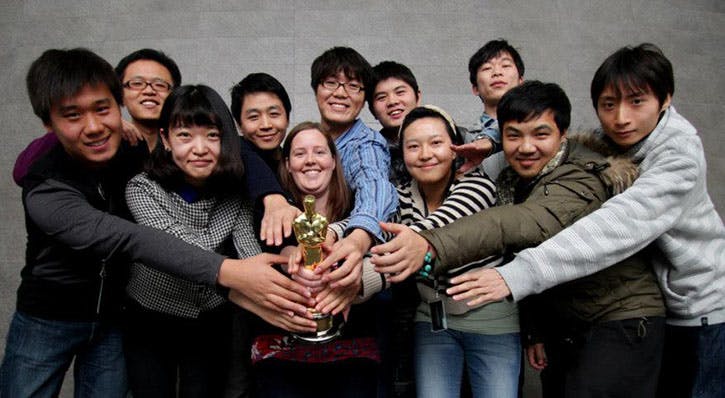 Working on such a spread of productions, does it give you an understanding of the kind of different issues and hurdles that you'll have to overcome in a VFX career and what to expect on day one, versus later on?

Very much so. It's also very different across B-rated movies versus the bigger productions for Marvel and Disney, for example. Many people want to work on Marvel movies in our industry right now, yet they can be some of the trickier ones to work on.

You can work on something initially that you think is going to be a problem. If it's a smaller show, you might think you’re not going to get the data that you need from set and all of those problems that you might encounter or not. But this might turn out to be a fabulous project to work on because you've ended up with a really good VFX supervisor on set who understands what's needed. Having worked on a range of projects, it's very quick for us to realise if a movie is going to be easy and smooth to work on or whether it's just going to be hell.

What makes a good VFX supervisor?

Someone who understands how much the camera tracking department needs markers put up on set and how to balance that with how much work it is to paint them out afterwards. Often, you'll find someone comes in and doesn't like to put markers in because they think it's going to take a lot of work to paint out. What they forget is that if you have markers in the shot, you can track it very well and it's actually easy for paint artists to remove the markers because the track is solid.

Also, if you're going to have creature interaction shots, someone who understands how to set that up so that the actor has the correct height to reach out and touch all of those things. I mean, it's not just the supervisor, others on set impact that, but the VFX supervisors who really understand the breadth of that make life much easier for a VFX artist.

What kind of films do you enjoy watching?

I like watching things that make me laugh. For me, movies are about escaping for a few hours into a different world. I'm not a big fan of real World War movies because we get a lot of that and I can read about it. I can look at photography exhibitions and for me, that's how I like to view that side of life. When I go to a movie, I want to go somewhere fun to a new world. I've been a little bad at going to the movies recently, but the Fantastic Beasts sequence has been my favourite for a while.

Outside of visual effects, I'm interested in virtual reality. I've attended a few panels on this. Montreal was actually quite a big hub for the emerging technology, so I'm quite fascinated with the concept between visual effects and theme park rides. That's quite a new, interesting way in which technology and effects are going. Those are two areas that I'd like to explore a little bit.

Have you done a lot of VR demos and do you have any particular favourites?

I've done the VR demo for the International Space Station and I also did the Fantastic Beasts demo which we had at work. This was really fun, although I missed out on a whole section because I didn't go through the door! I spent all my time in this beautiful room and picking things up and then realised when you go out, you actually get to see the creatures. I had to go back and book another session to do it properly.

It will be interesting to see where VR goes - it's a fascinating new media where you can really cross boundaries with storytelling. You can have a movie, a VR experience and then you have a game and all of these ways are further developing that depth of telling a story. This is what interests me the most about it. You bring it into the other elements of storytelling and it becomes a really fun way of immersing yourself into a new world.

The closest to reality I got was one underneath a helicopter. You are sort of flying and you were seeing all the scenery change below you. If they'd added a few sort of wind effects and things, you’d have really felt the full thing.

Is there anything else that you feel the students should know about you?

The biggest thing I want the students to know about me is I really love ideas and talking with people, so I have a very open door policy. Come and talk to me. Tell me what you're interested in, or if you have a problem we can try and fix it.

Interested in studying a degree in Digital Technology? Visit our course pages to find the right degree for you.

Our students have the means to produce industry-standard work. Discover more by exploring our blog.

What can I do with a Computing and Digital Technology degree?

Seven reasons to study a degree in STEM

Seven ways you can learn more about our faculty

What can I do with a degree in Music Technology or Sound Engineering?

Why study Digital Film Production and Visual Effects with us?