Fees & How to Apply

As a Principal Study Brass Band Conductor, you'll be offered individual tuition from expert staff conductors, and will spend considerable time developing your directing techniques in rehearsal and in performance. In addition to attending and participating in scheduled brass band activities, you will be encouraged to explore other opportunities to engage with ensembles, as director or observer, both within the Conservatoire and with professional organisations such as Services for Education and Tredegar Brass Band. Brass Band Conducting students should also expect to attend classes/workshops of their peers studying other conducting pathways.

It's normal for conducting students to be proactive in presenting performances of projects that they've generated themselves. You'll receive support and professional advice in pursuing such projects, which should be viewed as an essential element of your studies. Both PgDip and MMus courses provide excellent opportunities to develop other skills relevant to a future career in the music profession.

You'll have full access to our superb £57 million facilities, including our Concert Hall, 150-seat Recital Hall, our black box performance space known as The Lab, and more than 70 practice rooms, ensemble rooms and workshops; all acoustically designed to provide a music-making environment that is world class.

What's covered in the course?

At Royal Birmingham Conservatoire we provide a friendly and supportive environment in which you can pursue your postgraduate studies. This is a time when you need to think particularly carefully and strategically about the direction of your developing career as a musician. We therefore encourage you to be ambitious in pursuing your aspirations, and endeavour to provide you with the flexibility to mould your course to your individual needs, both within your Principal Study area and in complementary modules. 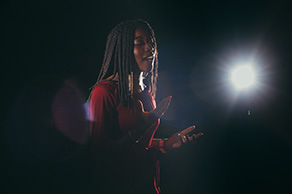 Our next Open Day for this course will take place on Thursday 11 June 2020. Visit us to get a real insight into student life at Royal Birmingham Conservatoire.

This course is open to International students Speak to an expert

Do you have a question about this course? If so, we’d love to hear from you. Send your question to the Course Director and they’ll get back to you shortly.

Honours DegreeHonours degree or equivalent in an appropriate subject.

Don't meet our entry requirements? You could apply for courses at our International College.

The University reserves the right to increase fees in line with inflation based on the Retail Prices Index or to reflect changes in Government funding policies or changes agreed by Parliament up to a maximum of five per cent.

Further information on writing your personal statement can be found on the UCAS Conservatoires website.

Our courses include activities such as performance, exhibitions, field trips and production of works or artefacts which may require you to purchase specific equipment, instruments, books, materials, hire of venues and accommodation, or other items. Many of these activities are essential and compulsory parts of your learning experience.

The link below gives you an estimate of the possible costs associated with key activities on your course. Please bear in mind that these are only estimates of costs based on past student experience and feedback. The actual costs could vary considerably (either greater or lower than these estimates) depending on your choices as you progress through the course.

All our students are provided with 100 free pages of printing each year to a maximum total value of £15.

We offer further information on possible postgraduate financial support. This includes the type of loans, grants and scholarships available both from the government and from Birmingham City University.

Did you know that you can apply for a postgraduate loan of up to £10,906 for some courses and options?

Whichever course you choose, work in the Principal Study area lies at its heart, and this involves the experience of managing rehearsals and directing performances, as well as developing essential musicianship skills. These modules will enable you to become self-directed in tackling, and capable of solving, technical and musical problems, and working autonomously in planning and presenting performances at a high artistic level. You'll be supported both by the specialist individual tuition you receive and by your experiences as a conductor throughout the course.

You will take a Career Development module, which will require you, near the beginning of your course, to reflect ambitiously yet realistically on your professional aspirations, and to formulate a plan that helps you stand the best chance of achieving your goals. You will also choose, in addition, some Professional Development Options from a varied list. The following gives an indication the kind of optional modules which may be offered in a given year, including some offered by Birmingham City University’s Schools of Art and Media (note, not all will run every year):

MMus students will additionally choose a 40-credit option from one of two categories: ‘The Emerging Researcher’ or ‘The Reflective Practitioner’.

There is some room for negotiation in how the course unfolds for a part-time MMus student over three years, or in the case of part-time PgDip students, over two years.

OpportUNIty: Student Jobs on Campus ensures that our students are given a first opportunity to fill many part-time temporary positions within the University. This allows you to work while you study with us, fitting the job around your course commitments. By taking part in the scheme, you will gain valuable experiences and employability skills, enhancing your prospects in the job market.

It will also allow you to become more involved in University life by delivering, leading and supporting many aspects of the learning experience, from administration to research and mentoring roles.

£6,000 extra per year is what someone with a Master's or PhD earns over someone with just a degree. Graduate Labour Market Statistics 2016, Department for Business, Innovation and Skills
96% of our postgraduates find work or further study within six months. DLHE 2016/17 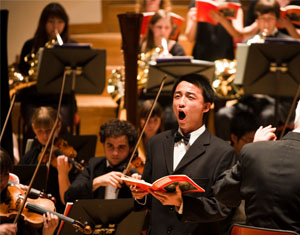 Birmingham Conservatoire has a growing community of international students from across the world.

We appreciate the challenges of moving to a new country to live and study, and aim to be as supportive as possible.

Aside from being friendly and welcoming, we have various support mechanisms in place to help you settle in as an international student, including:

International students who have a serious interest in studying with us but who perhaps cannot meet the direct entry requirements, academic or English, or who have been out of education for some time, can enter Birmingham City University International College (BCUIC) and begin their degree studies.

BCUIC is part of the global Navitas Group, an internationally recognised education provider, and the partnership allows students to access the University’s facilities and services and move seamlessly through to achieving a Bachelor’s degree from Birmingham City University.

Our students come from around the world but our conducting course is most popular with international students from: Our new home is the first conservatoire built in the digital age, and as such it has been vital to ensure that the technical infrastructure installed is on par with any advanced commercial facility. We have seven recording studios, a mastering suite, a distance learning hub, and all of our performance venues feature high specification audio-visual equipment that enables interconnectivity and advanced functionality throughout the building.

These impressive modern facilities guarantee that we are excel in our unique dual purpose of providing the highest standard of music education deserved by our students, as well as meeting our role as a concert and performance venue for the people of Birmingham; taking our place in the vibrant cultural landscape of the UK’s second city. 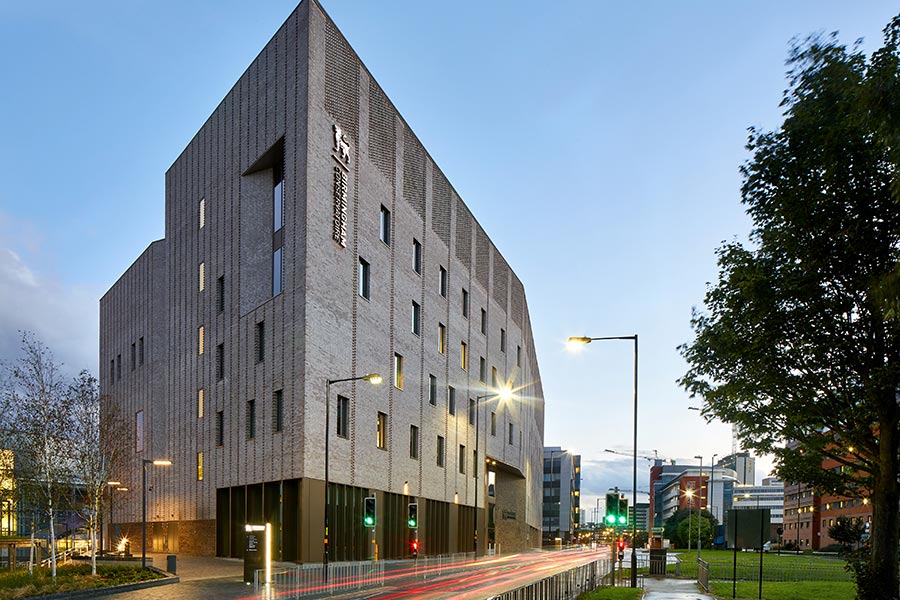 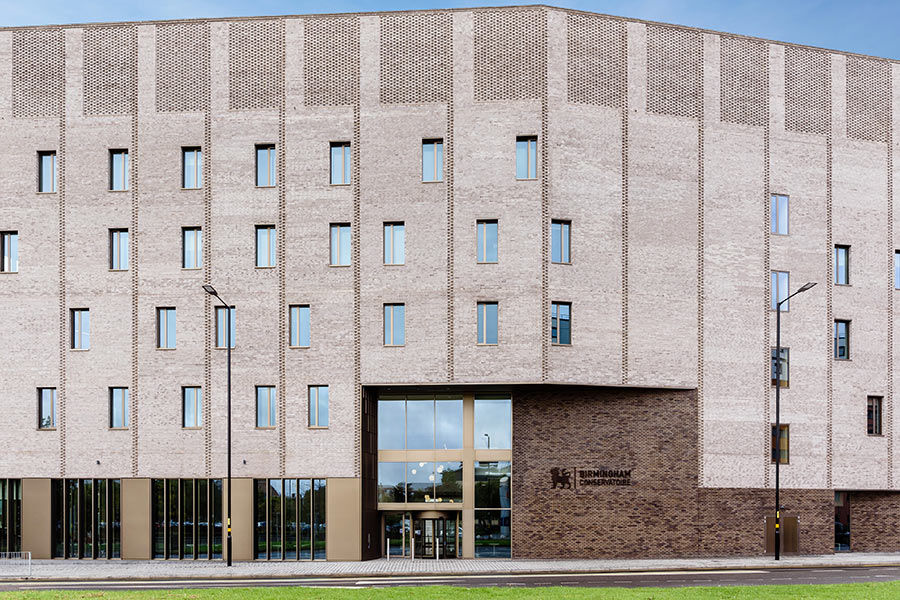 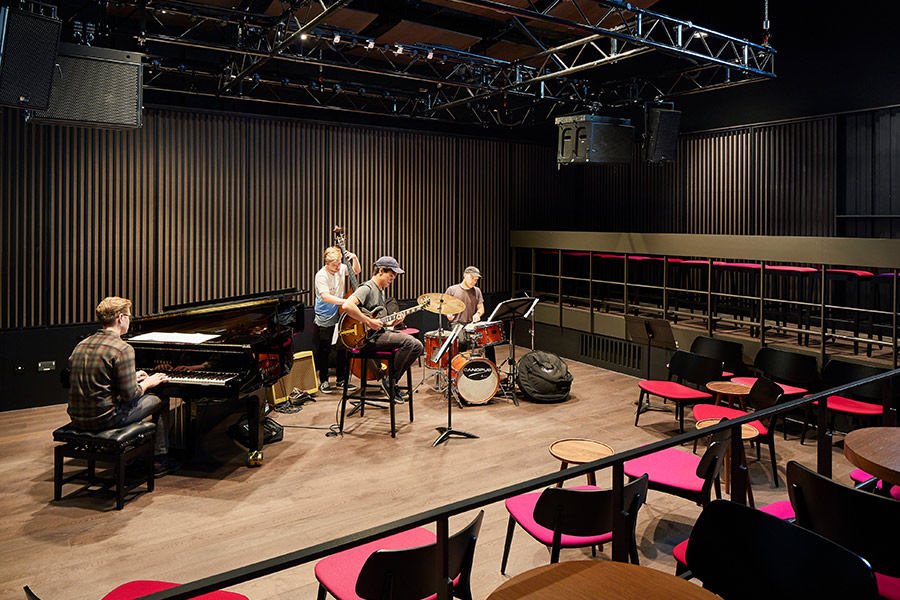 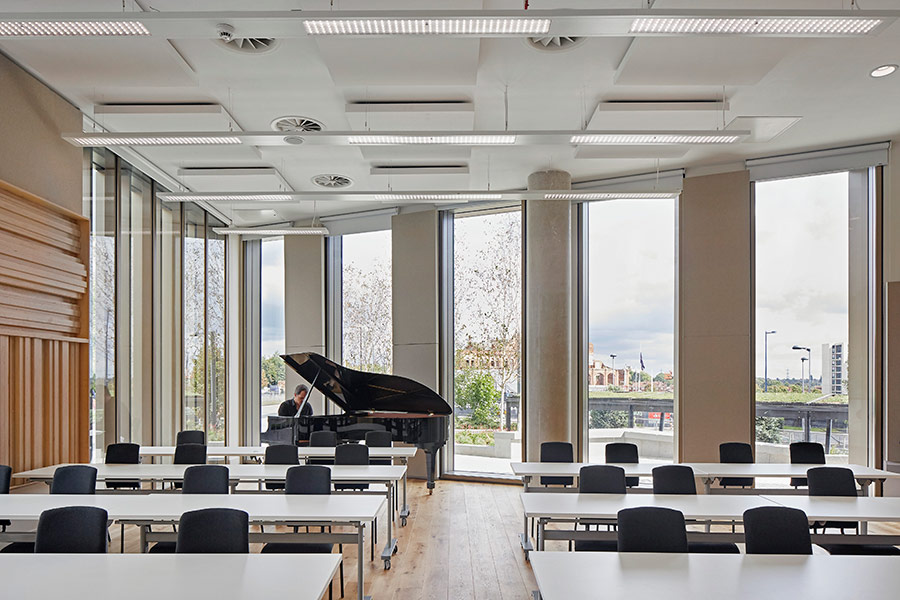 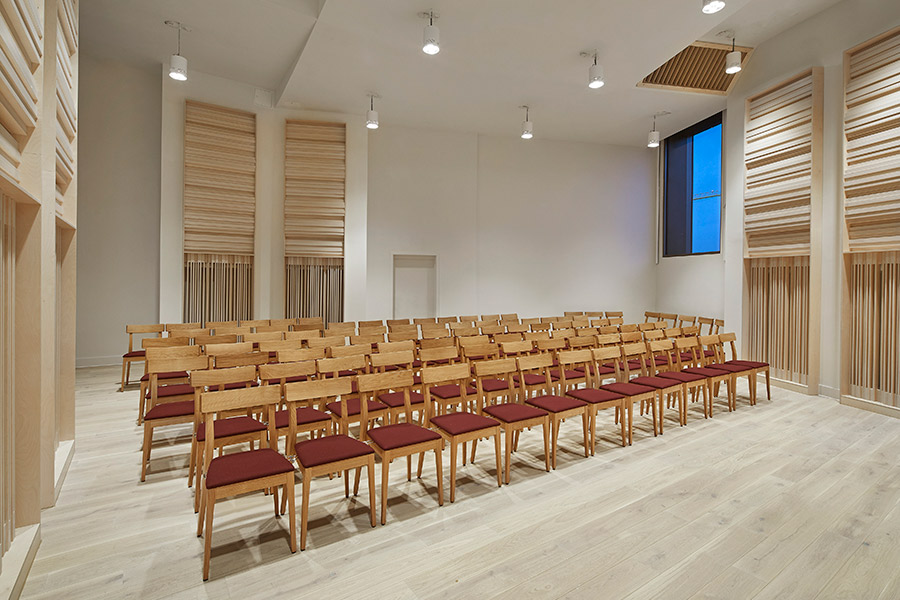 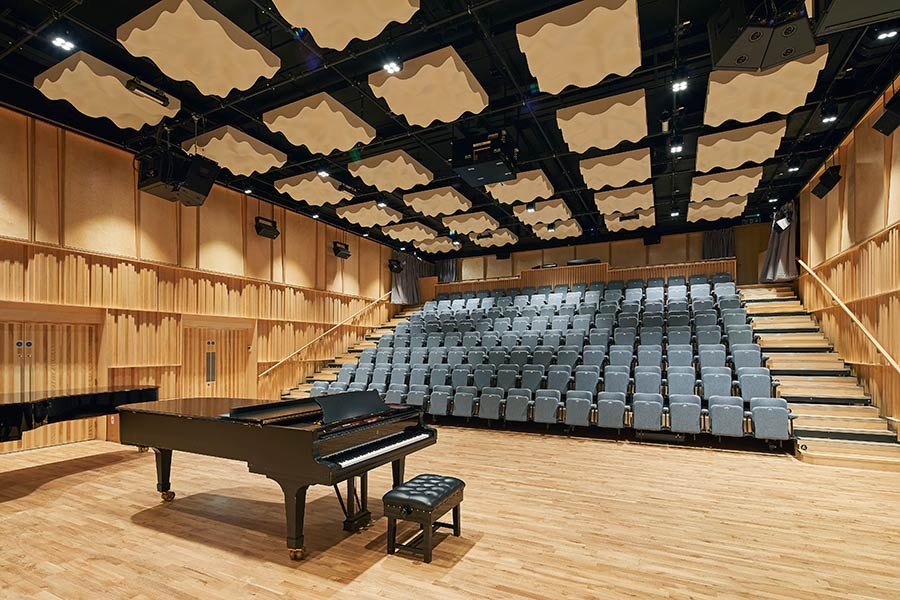 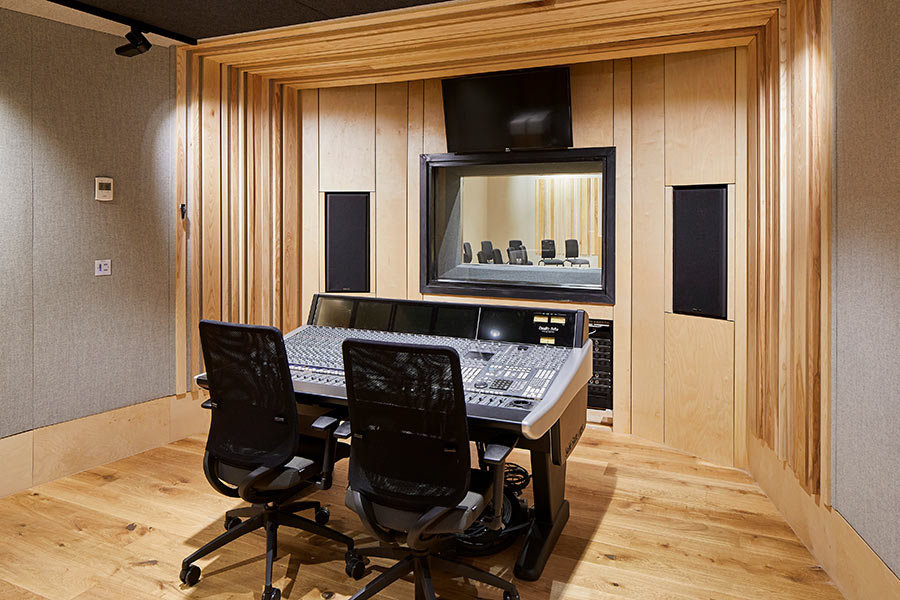 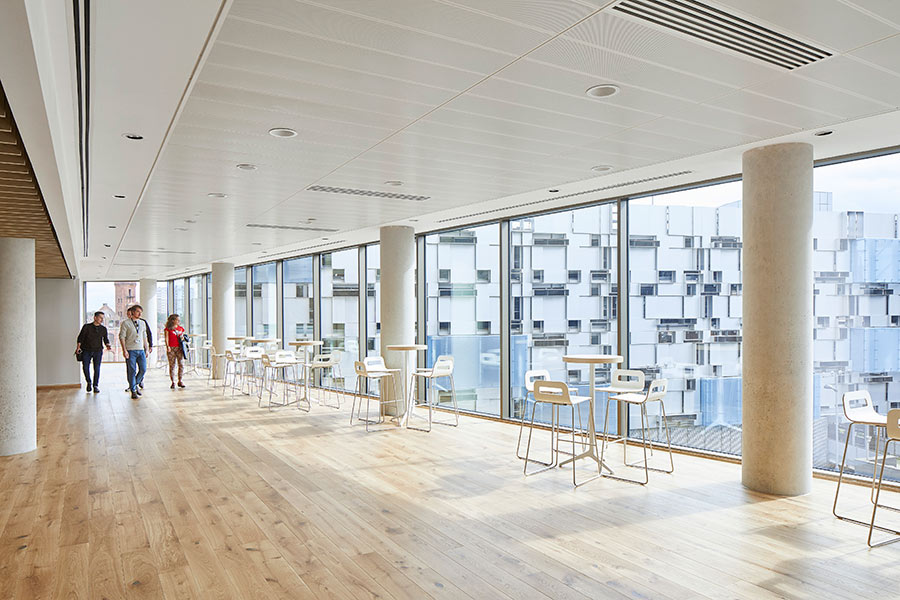 Ian Porthouse was born in Cumbria in 1967 into a family of musicians: his father was a cornetist and mother a pianist/singer.

At the age of five he began to take an interest in his dad's trumpet and joined Flimby Saxhorn Silver Band on 3rd Cornet where his father was principal cornet; within five years he would take over the end chair himself.

Also around this time Ian became a founder member of the Cumbria Youth Brass Band under Richard Evans, who was to have a big impact on his career.

At the age of 16, Ian became the leader of the National Youth Brass Band of Great Britain and led the band for three years in total.

Richard Evans invited Ian to join the Leyland Vehicles Band in 1984 and within six months he was the new principal cornet at the age of 17.

In 1987 he went on to play with Desford Colliery Band under James Watson; the band became National Champions three years in succession.

In 1992, Ian was appointed Principal Cornet with the Black Dyke Mills Band, a position held by only five people in the previous 40 years, leading them to victory at the National Championships in the Royal Albert Hall in 1994.

During this time he played in such illustrious venues as the Carnegie Hall in New York and featured as a soloist with Phillip Smith, Principal Trumpet with the New York Philharmonic Orchestra.

In January 1995, Ian joined the Tredegar Town Band as Principal Cornet and resident conductor. He also conducted the Tredegar Youth Band and took them from National youth section to National 3rd section in two years.

1997 saw Ian accept an invitation to become Principal Cornet with the Yorkshire Building Society Brass Band under Musical Director David King. In that year, the band retained its European Champions title and became British Open Champion for the first time in its history, with Ian gaining the award for most outstanding soloist.

In 1999 Ian became musical director of Pennine Brass, taking them from the 2nd Section to the Championship Section in two years, including consecutive appearances at the National Brass Band Championships in 2000 and 2001, and numerous other contest victories, including the French Open title in 2001.

Ian gained another two National Championship wins with the Williams Fairey Band in 2002 and 2003 under Alan Withington.

Ian took up the baton with Tredegar Town Band in 2008 and has led the band to the National Finals every year since. Ian is also the only conductor ever to lead a band to victory at the Grand Shield and British Open in the same year with Tredegar’s memorable double in 2010.

Ian is currently Director of Brass Band Studies at the Birmingham Conservatoire and is in high demand as a professional conductor, tutor and adjudicator.

Luan is Director of Postgraduate Studies and Head of Pedagogy at Royal Birmingham Conservatoire where she has taught since 2011. She is a Senior Fellow of the Higher Education Academy, and was made an Honorary Member of RBC in 2001. She is passionate about helping students to build their portfolio careers and having recently completed research in this area via the MEd in Academic Practice at Birmingham City University, her doctoral research also focuses on facilitating the transition from student to professional through instrumental teacher education in conservatoires.

An alumna of RBC, Luan became a member of the European Union Youth Orchestra and recipient of the Worshipful Company of Musicians Silver Medal soon after graduating in 1994. She freelanced with the CBSO and other UK orchestras for over 20 years and played principal clarinet for numerous Longborough Festival Opera productions including Wagner’s Ring Cycle. As a chamber musician, Luan has performed throughout the UK, on BBC Radio and at the Banff International Festival, and her research on Members’ Roles in Wind Quintets was published shortly after completing an MA in 'Psychology for Musicians' at the University of Sheffield.