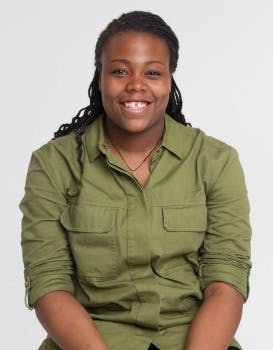 Chalcedony is a final year student at Birmingham Conservatoire studying the BMus Performance 4 Course. She recently culminated with a concert at the MAC Birmingham.

You can find the choir on Facebook by searching: Birmingham Conservatoire gospel choir 2016.

What three tips would you offer to a student studying on your course?

Tip no. 1 would be to "believe you're good enough". No one will believe it for you and the worst thing that could happen is a fear of failure stopping you from seizing every opportunity.

Tip no. 2 is "seize every opportunity". We're here to learn and we learn best by putting into action everything we practice and study for. Every experience counts, whether it is successful or not. If it doesn't work out the first time, you'll know what not to do next time.

Finally, "do something different". To me, University is the perfect place to push boundaries, challenge perceptions and discover something new. We don't study to become carbon copies of everyone who came before us, in the same way that we don't produce work that someone has already done. Always look for a new angle and dare yourself to stand out.

Who, according to you, defines the word ‘inspirational’?

I am currently most inspired by the actor Viola Davis. Not only is she an amazing and captivating presence, but it has taken her a long time and a lot of effort to finally be recognised for her work. She came from a less privileged background and experienced the pressures of trying to make it in a world where roles and opportunities for black women are often limited. There are lots of ways I can identify with her experiences but her perseverance and intensity are what stand out the most.

What experiences from the course have you had gained whilst studying that you think will assist you most in your next job?

This final year has been the most challenging. I started a gospel choir at the Conservatoire and a choir in the City Centre. I also organised, rehearsed for and advertised our very own concert at the MAC Birmingham. It was stressful at times, but I learnt about budgeting, applying for funding and venue hire. Also, I tried my hand at designing posters, programmes and my own advertising. I feel as though, having done it once, I could see myself organising my own performances in the future. I have also enjoyed leading the choir and leading people who don't know much about singing but have a desire to sing, not only at the University but also in two schools in Sutton Coldfield. It has been inspiring to see people grow in confidence and I would love to do more!

What are your career plans after graduation?

I will be starting a Master’s degree in September in Composition. Alongside my current degree in classical saxophone, I had the opportunity to study composition. The experience of being able to write my own music was liberating; I prefer it to performing. I am looking forward to really exploring my own creativity and learning more about composing. Following that, I would really like to work at a University in an academic role and see what opportunities come my way.

What have been the highlights during your time at University?

I was an Aimhigher mentor during my second year and named Birmingham City University (BCU) Aimhigher mentor of the year and runner-up in the West Midlands. In my third year, I studied in The Hague, Holland on an Erasmus exchange. I was able to experience a new culture and meet new people, as well as be involved in a saxophone orchestra and some arranging work. My playing also improved and I became much more confident. Performance-wise, I have loved leading the choir this year. I am also in a saxophone quartet, the Nuance quartet and we have had many performance opportunities over the years. Most notably, a concert in Leatherhead as part of a series by the Atea wind quintet, introducing up and coming chamber ensembles. I have loved my whole University experience.

What inspired you to pursue a career in music performance?

My dad is a musician and my parents have always been keen for me to learn music. I started with piano lessons at age 6 and started playing keys at church from age 9. When I got to secondary school, I had the opportunity to learn the saxophone for free and I also enjoyed playing the drums. By the end of sixth form, I was playing in a local wind band which had toured around Germany and Belgium and I had toured Barcelona with my school. I loved music so much that although it wasn't a career path that promised financial stability, I realised that even if I chose a different career, I would still try to be a musician at the same time. Then I heard about Conservatoire and that it was possible to do a degree in music and I decided to go for it.

What is your favourite thing about Birmingham?

Birmingham is transforming at the moment, the city is growing and becoming more exciting. The developments make it look a little rough, but when it is finished, it will be an amazing place. Boasting many venues and locations for performers like myself. The night life will consist of much more than Broad Street clubs, there will be places to socialise and unwind and enjoy good food and music. I love how multi-cultural the city is and the fact that the University City Centre campus is becoming a hub of creativity and innovation.

Can you tell me more about your concert at the MAC?

The concert was a part of my final year project. It featured the Conservatoire gospel choir which I set up this year and I also invited some external musicians and soloists to perform. It was entitled "How Excellent! A Gospel Celebration" and the idea was to introduce people to the gospel music I enjoyed growing up, as well as take those who know about gospel music on a trip down memory lane. The project brought together classical and jazz students; religious and non-religious people; musicians and non-musicians. It also introduced people to black culture and raised the profile of the Conservatoire to audiences, who perhaps had never heard of it. It was hugely successful, the venue sold out and the audience had a great time. We also raised around £500 for the charity Shelter. It was one of the best nights of my life so far and I realised I could get a degree whilst doing something I really love and whilst being myself, not trying to be someone else.