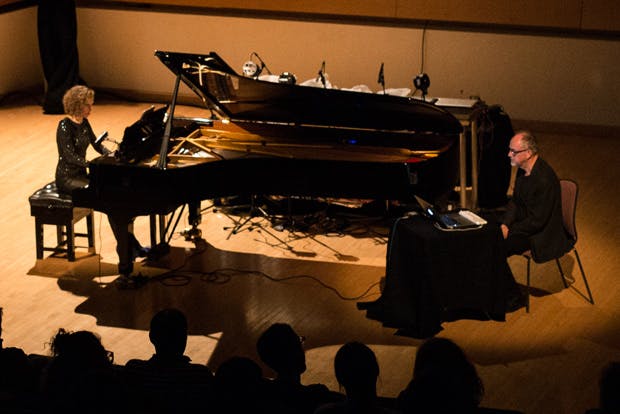 The Goldberg Variations form a cornerstone of keyboard repertoire, yet we rarely question the mode of presentation for this piece. Austrian composer Karlheinz Essl offers a refreshing glimpse of a new performance practice through his unusual take in Gold.Berg.Werk (2013-16). Originally envisioned as a performance environment for string trio, this new version for piano and live electronics is available for the first time in a recorded format. Time-stretched harmonies are manipulated in real time and played back through spatialised loudspeakers in between the piano variations, bringing together Baroque and contemporary sound worlds.

This new reimagining of Bach’s vision juxtaposes the variations in a new strictly symmetrical structure which reflects the binary form of the original aria (a microcosm within a macrocosm with binary divisions commonly found in digital systems). No two performances are the same due to the live generation of the electronic interludes.

Gold.Berg.Werk transcends itself and becomes a new piece in its own right, creating a sense of space and grandeur through electronic distribution of the interludes. This magical performance invites and entices the audience to join us on a journey of discovery, opening and blossoming into a new universe of sound.

Austrian composer, performer, improviser, media artist and composition teacher Karlheinz Essl attended the Vienna Musikhochschule, where he studied composition with Friedrich Cerha and electro-acoustic music with Dieter Kaufmann. He also studied musicology and art history at the University of Vienna. Active as a double bassist until 1984, he played in chamber and experimental jazz ensembles. Since 2007, he is professor of composition for electro-acoustic and experimental music at the Vienna University of Music and Performing Arts.

His work with computers (with emphasis on Algorithmic Composition and generative art) and a prolonged occupation with the poetics of serial music have been a formative influence on his compositional thinking. Besides writing instrumental music, Karlheinz Essl also works in the field of electronic music, interactive realtime compositions and sound installations. He develops software environments for algorithmic composition and acts as a performer and improviser, utilzing his own computer-based real time composition environment m@ze°2 and also instruments like electric guitar, toy piano and music box. https://essl.at

Xenia Pestova Bennett is a performer, researcher and educator. Described as “a powerhouse of contemporary keyboard repertoire” (Tempo), “stunning” (Wales Arts Review), “ravishing” (Pizzicato) and “remarkably sensuous” (New Zealand Herald), she has earned a reputation as a leading interpreter of uncompromising repertoire alongside masterpieces from the past. Xenia’s widely acclaimed recordings of core piano duo works of the Twentieth Century by John Cage and Karlheinz Stockhausen with Pascal Meyer are available on four CDs for Naxos Records. Her evocative solo debut of première recordings for the Innova label titled Shadow Piano was described as a “terrific album of dark, probing music” by the Chicago Reader. Xenia's most recent offering Gold.Berg.Werk (Ergodos) is a radical reimagining of JS Bach's Goldberg Variations with spatialised live electronic interludes by Karlheinz Essl, hailed as "a sci-fi journey in the direction of 1741” (Luke Clancy, RTE Lyric FM).

As a composer, Xenia's full-length album Atomic Legacies (Diatribe) features Ligeti Quartet and the Magnetic Resonator Piano. Her subsequent EP Atonal Electronic Chamber Music for Cats (TakuRoku) takes an unexpected turn in an exploration of 1990s techno-art-pop nostalgia with vintage synthesizers. Xenia is Associate Professor in music at the University of Nottingham. She also provides coaching to individuals and organisations on anxiety management using movement, breathwork and focus-based interventions. https://xeniapestovabennett.com

Gold.Berg.Werk: "like opening another floor in the labyrinth of Bach’s imagination” (Tom Service, BBC Radio 3); "a sci-fi journey in the direction of 1741” (Luke Clancy, RTE Lyric FM)