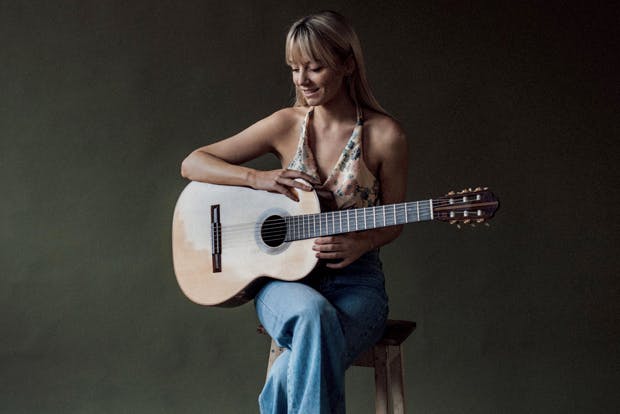 This concert is part of Royal Birmingham Conservatoire's Guitar Day

The VIDA Guitar Quartet brings together four guitarists of exceptional artistry who share a passion for chamber music featuring Mark Ashford and Amanda Cook, both internationally renowned performers in their own right as well as Mark Eden and Christopher Stell otherwise known as the Eden Stell Guitar Duo, one of the most innovative guitar duos in the world.

Since forming in 2007, VIDA has performed to critical acclaim in major UK venues including Kings Place (London), The Purcell room (London), The Sage (Gateshead) and St Georgeʼs (Bristol). They are sought-after festival artists throughout the UK, Europe and North America

In 2011 VIDA made their US debuts in Los Angeles and New York. They were Artists-in-Residence at CSU’s Summer Arts program in Monterey Bay CA in March 2012.

The VIDA Guitar Quartet has appeared on some of North America’s most prestigious stages for classical guitar, including the Long Island Guitar Festival and the Allegro Guitar Series in Dallas, Fort Worth, and Las Vegas. They have been chosen as the keynote performers for the 2015 GFA (Guitar Federation of America) Annual Conference, one of the world’s most high-profile engagements for guitarists. 2017 marked the quartets debut in China as part of the Changsha International Guitar Festival where they were invited to play the closing night's concert.

In April 2013 following on from their acclaimed debut CD, Love, the Magician (BGS118) VIDA released Rhapsody featuring works by George Gershwin, Malcolm Arnold and Adam Gorb. The next recording The Leaves be Green, includes music by English composers such as Benjamin Britten, Vaughan Williams and Edward Elgar. In Autumn 2017 a collaboration with saxophonist Amy Green saw the release of Bachianas.With Bach’s Brandenburg Concerto No.3 (the theme) and a collection of pieces directly inspired by Bach (the variations) this recording features composers such as Mendelssohn, Villa Lobos as well as two new works written for the quartet by Howard Skempton and Laura Snowdon. 2019 was a busy year for VIDA with extensive tours in the US with concerts in Arizona, Florida, South Carolina and Colorado, and in China performing in concert halls in Shanghai, Shenzhen, Guangzhou, Dalian, Nanchang and Haian.

After studying classical guitar, piano, jazz guitar and composition at Chetham’s School of Music for seven years, Alexandra Whittingham gained a scholarship to study at the Royal Academy of Music in London. Having been awarded first class honours and the Timothy Gilson Guitar Prize in 2019, she returned to the Royal Academy the following year to complete her master's degree. She graduated with a distinction, a Diploma of the Royal Academy of Music (awarded for an outstanding performance in a final recital) and the Regency Award for distinguished studentship.

In May 2021 Alexandra released her debut studio album My European Journey, which explores the guitar’s great coming of age in nineteenth-century Europe. The album reached No.1 on the iTunes Classical Chart as well as taking first place on The Presto Chart solely through pre-orders before its release. My European Journey sees Alexandra's passion for nineteenth-century music combine with a love of discovering lesser-known composers and bringing them into the spotlight.

Maintaining an active online presence, Alexandra has gained over 200,000 subscribers on YouTube during the last five years, where videos of her performances have collectively surpassed 30 million views. Her audience online has lead to live performances all over Europe including at Festival Le Temps des Guitares in South-West France, the British Embassy in Paris, Vilnius Town Hall in Lithuania and venues in Italy and Germany.

She is delighted to be an Augustine Strings artist, using their Regal Blue range, and plays a 2011 Christopher Dean guitar.