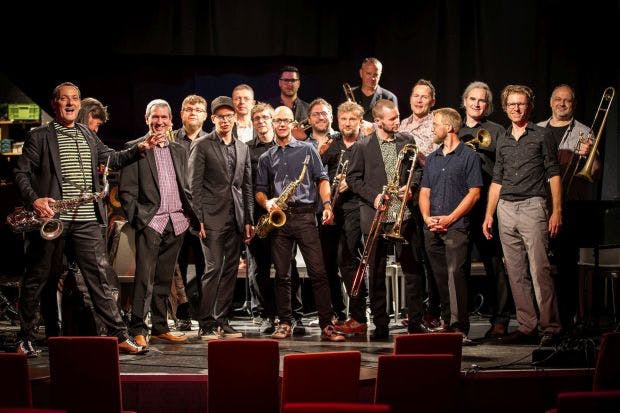 Ed Puddick is an award-winning arranger, composer and educator. His reputation was established through his writing for the Ed Puddick Big Band, a 14-piece ensemble for which he has written a huge number of works, including the celebrated projects ‘Guys & Dolls’ (Diving Duck Recordings, 2010), ‘Jubilee Suite’ (2012) & ‘Only Thelonious’ (2017).

In 2018 Ed won the Arranging Prize in the International Composition Competition at the Barga International Jazz Festival, where his winning arrangement of Dizzy Gillespie’s “Con Alma” was performed by US trumpeter Jeremy Pelt.

Ed teaches jazz composition and arranging at Royal Birmingham Conservatoire where he was a student between 2000 - 2004, studying trombone with Jeremy Price and composition with Mike Gibbs and Hans Koller. Ed currently sits on the IVORS Academy Jazz Committee and is dedicated to improving the situation for jazz composers in the UK.

In 1993, the UAJO won the Billa Big Band Contest, the finals of which were broadcast on TV from the Vienna Konzerthaus by ORF.

In 1994 and 95 the UAJO was stage orchestra at the Viennese jazz club Porgy and Bess, where it had the opportunity to present a wide variety of programmes (from Count Basie to contemporary big band literature). In autumn 1995, the UAJO went on tour with the legendary trumpeter and composer Kenny Wheeler through Austria, Germany and Poland.

The music recorded at the end of the tour (double CD, UAJO plays the music of Kenny Wheeler, WW 2097) is exclusively by Mr. Wheeler, dedicated to the UAJO and partly written for it. After the presentation of the CD at the International Big Band Festival in Lasberg, Upper Austria in 1996 and a ten-day concert tour through Austria in 1997, the UAJO was invited to present its programme with Kenny Wheeler at seven of the largest international jazz festivals in Canada in the summer of 1998. The festivals in Toronto, Vancouver and Montreal are among the largest and most important jazz events in the world.

The programme Upper Austrian Jazz “Composers” Orchestra presents the musicians of the orchestra also as composers. 11 pieces, written exclusively by members of the UAJO, have been put together to form a varied programme with no stylistic restrictions. The Upper Austrian Jazz Orchestra hereby presents its very personal view of contemporary orchestral (not only jazz) music.  This concept and the unadulterated joy of the wonderful musicians of this orchestra turn the concerts into (listening) experiences. After 20 concerts in Austria, Italy, Slovenia and Slovakia, this programme was recorded in the studio in September 1998 and released on CD in March 1999. (PAO10590, Upper Austrian Jazz Composers Orchestra, La Lampe Philosophique).

After another tour with Kenny Wheeler through Italy and Austria, the UAJO met jazz legend Johnny Griffin at the Jazzsommer in Graz 1999, whose compositions were arranged by band members.

In April 1999 the orchestra worked with Jack Walrath, one of the most interesting trumpet players and composers from New York, who played with Charles Mingus for years and was the musical director of his big band after his death. This extremely fortunate meeting resulted in another tour through Austria and Switzerland in April 2000. This was recorded live and released in Nov. 2002, The Upper Austrian Jazz Orchestra - feat. Jack Walrath - You Got My Wife But I Got Yout Dog (Universal Music Group - EmArcy 066 647-2). This CD was nominated for the Hans Koller Award as best CD of the year 2003.

In February 2000, the UAJO collaborated with composer Michael Gibbs at the Jazz-Art Festival in Wels and the Radiokulturhaus in Vienna. Michael Gibbs became known through his collaboration with Gary Burton, Carla Bley and John Scofield and composes for renowned big bands and orchestras. Invitations to festivals in Zagreb, Velenje and Klagenfurt with this programme followed.

In April 2001 there was another tour with Kenny Wheeler through Austria (music for large and small ensembles). The programme Deference to Anton Bruckner featuring with the music of Anton Bruckner, was premiered in December 2001 and was performed at concerts in Austria and Italy in 2002 and recorded on CD in September and released by Universal Music in 2003. Members of the band, but also Kenny Wheeler and Michael Gibbs contributed arrangements or compositions inspired by Bruckner's nine symphonies.

In autumn 2002 there were three concerts with the trombone legend Slide Hampton in the Brucknerhaus Linz, Porgy and Bess in Vienna and in the Generalmusikdirektion Graz.

At the Gmundner Festwochen in August 2003, a new programme was premiered, the theme of which was the life and work of Thomas Bernhard. Dessöwe Aundas oder Thomas Bernhard groovt was selected for the series Musik Aktuell in NÖ and performed in Austria and Germany in 2004. A CD of this programme was released in 2005

The cooperation with Michael Gibbs was continued in February 2005. The UAJO played a Glenn Miller programme arranged and conducted by Mr Gibbs, which was performed at the Brucknerhaus Linz and the Radiokulturhaus Vienna. The CD was released in October 2005 by ATS Redcords and was presented on tour.

In August 2005, a programme of compositions by Friedrich Gulda was performed in a co-production with the Gmundner Festwochen, with musicians from the UAJO contributing arrangements. The well-known Golovin songs and shorter jazz compositions by Gulda were adapted and expanded for the orchestra and the songs were interpreted extremely aptly by Willi Resetarits. In July 2006 this programme was repeated with Paul Gulda on piano and voice. The programme Wein, Weib und Gesang (Wine, Women and Song), which took the Golovin songs of the Gulda programme as a basis and was supplemented by further Viennese and Upper Austrian songs from the folk culture heritage, was premiered in autumn 2006. The songs were, of course, not only arranged by the musicians of the UAJO, but they were also, as in the previous programmes, the starting point for their own creative work, which more or less detached itself from the specifications or/and sought to process them in its own compositions. For the first time, the Viennese singer Tini Kainrath, who has mastered the authentic art of Viennese bagpipes, took part in this project. Furthermore, instruments from the Viennese and Upper Austrian folk music tradition were used as additional authentic sound colours. The programme, Wein, Weib und Gesang was recorded at the beginning of 2008 and released on ATS Records in spring 2008.

In 2008, the UAJO also worked on a new programme. Texts by young Austrian authors were set to music by UAJO musicians and the programme Song-Song oder 7 Musen und 4 Laster was put together from them. Tini Kainrath and Ali Gaggl took over the two vocal parts. The CD was released in April 2009.

The cooperation with Michael Gibbs was continued in 2010. Mr Gibbs arranged classics of the swing era especially for the UAJO and transformed them into a contemporary musical language. On two tours through Croatia and Austria in April and September, the programme Swing and all that Jazz was rewarded with a large audience. The concert in Zagreb was recorded by Croatian television and broadcast several times. In November 2011, the programme was recorded live at four concerts and was released on CD (ATS Records) in April 2012.

In autumn 2012, the UAJO presented its new programme Without music, life would be a mistake or A small contemplation for large orchestra with the cabaret artist GUNKL. Together with the UAJO, GUNKL - also a musician - captures phenomena in and around music as such in words and again in music - shortly the same as in the Th. Bernhard programme.

2013 saw the start of a new cooperation with the new music theatre in Linz. The UAJO was involved in the opening celebrations of the new theatre, a jazz series in the Black.Box and regular "opera brunches" are musically curated, and every year there is a big gala concert with a guest star.

In November 2013, there were three brilliant concerts with the big band legend Toshiko Akyioshi (including at the Linz Opera), who is still active as a bandleader despite her 83 years. A live recording was released on CD in 2015.

In September 2014, the UAJO was involved in a multimedia production of the Transformalein Carinthia, the project Land in sight addressed the general cultural and political situation in Carinthia.

In February 2015, the UAJO started a new programme with the vocal artist Maria Joao from Portugal. Arrangements and compositions by the band members were again presented at four concerts in Austria, highlighting commonalities in the musical work of the two parties. The collaboration continued in autumn 2015 and 2016.

In April 2016, the UAJO had the opportunity to perform a concert with guitar legend Mike Stern at the Musiktheater Linz, after which the programme went on a small tour of Austria.

In May 2017, there were two concerts with Richard Bona, at the Musiktheater Linz and P&B in Vienna.

A new programme In the spirit of Hans Koller dealt with the artistic personality Koller and was premiered in autumn 2017. Hans Koller, of whom Joe Zawinul had already said that he had been his best teacher, was visionary as a jazz musician and also went about his work as a visual artist with the utmost passion. To mark the 25th anniversary of the UAJO's existence, the recording of the concert on 15 January in the Porgy and Bess was released on CD in autumn 2018.

In May and June 2018, the UAJO invited the vibraphone master Mike Mainieri from the USA to play four concerts together in Austria. Mainieri celebrated his 80th birthday in 2018 and we were happy to honour his life's work around the hits of his legendary band Steps Ahead accordingly.

March 2019 saw the 6th edition of the concerts in the large hall of the Linz Music Theatre, this time with the accordion virtuoso and composer Richard Galliano from France.

In 2020, the American singer Jane Monheit was a guest of the UAJO at the Musiktheater in Linz on 5 March shortly before the Lockdown.

In summer 2020, a joint project with the Brazilian composer, drummer and percussionist Fernado Paiva was launched. The Brazilian World Music Project features Paiva's compositions in arrangements by the band members, while the musicians also perform as composers. Audio recordings and video clips were produced at the papermaking museum in Laakirchen and the music was then premiered at a concert. After concerts in Austria in Niovember 2020, the plan emerged to bring the project to Brazil in 2022, in addition to tours in Germany and Italy.

Ali Gaggl, the long-time singer of the UAJO, took the opportunity to record two songs (arranged by Anna Maurer and Jürgen Haider) with the UAJO for their new album in July 2020.

In November, the BWM Project was completed with compositions by the band members and a CD was recorded. This was released by ATS Records in autumn 2021 and presented at concerts in Austria.

At the beginning of 2021, music by Ed Puddick, composer and arranger from England, with whom we have a common friendship with the master Michael Gibbs, was recorded. This was also presented at several concerts in Austria in June 2021.

In 2022 there was a new edition of the project with Maria Joao on a tour through Western Austria. Concerts with the BWM Project with Fernando Paiva and the Lithuanian singer Egle Petrosiute and a tour to England complete the 2022 activity.

In October/November the UAJO is invited to present its joint programme, Crazy Days with composer/arranger/conductor Ed Puddick at festivals in Wigan, Birmingham and London.

There will also be workshops at Royal Birmingham Conservatoire where members of the UAJO will share the experience of their 30 years of orchestral work with students.