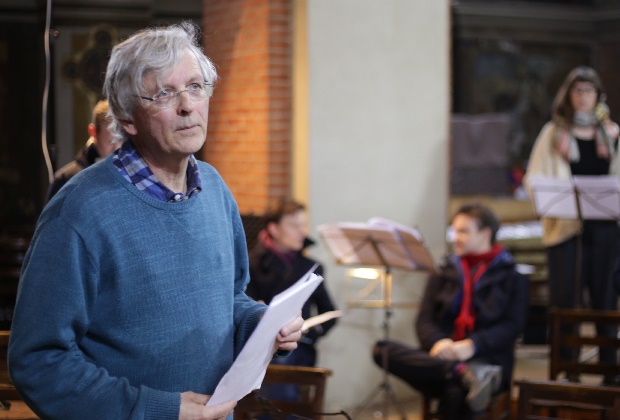 William Hunt: The rhetoric of verse singing in the pre-Restoration consort anthem

Several English writers and poets in the period around 1600 refer to a closeness between the rhetorics of music and literature, some even identifying rhetorical figures which are common to both. In Germany, a major branch of music theory develops the idea, inspired by Luther and blossoming in the later 17th and 18th centuries, yet English composers and musicians are relatively silent on the subject. What might it all mean for performance of the great consort anthem repertoire today?

William Hunt was a founder member of the viol consort Fretwork and plays violone and viols with several leading period music ensembles. He also directs Fretwork Editions, a specialist publisher of repertoire for viols. He has taught at a number of music conservatories and courses in the UK and presented papers at international conferences. At Royal Birmingham Conservatoire, he is a doctoral researcher into the performance of the pre-Restoration consort anthem, with a particular focus on those of the little known Edmund Hooper.

Bobbie-Jane Gardner discusses her PhD research project which examined the formation of a compositional and curatorial methodology drawing from socially engaged practice via the notion of ‘hyperlocal’ and site-specific working methods. for-Wards – a two-year citywide music programme celebrated Birmingham’s communities through the commissioning of ten composers, to co-create ten bespoke works with forty Birmingham based community groups. The Vinyl Community Collaborative Composing Project involved collaborating with fellow vinyl aficionados inspired by arrangers of the 1960s.